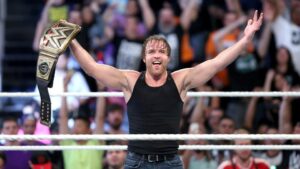 Last night at Money in the Bank, it seemed that WWE finally got the message that fans do not want Roman Reigns to be WWE Champion and will not cheer for Roman Reigns no matter what right now.  If the chorus of boos for Reigns on ever TV show wasn’t enough, the drop in ratings and house show attendance surely was because WWE is making changes, although coming away from Money in the Bank with Dean Ambrose as WWE World Heavyweight Champion was one no one saw coming.

For weeks WWE has billed this Money in the Bank event as the biggest ever, with “WrestleMania-worthy” matches like John Cena vs. AJ Styles for the first time and Roman Reigns taking on Seth Rollins to finally decide who the rightful WWE Champ was.  While the “new generation” has been a nice change of pace lately, the stale WWE Title picture had fans hoping Seth Rollins would return and save the day even though his role is that of the a–hole who doesn’t want their cheers – basically “anyone but Reigns” is the sentiment from the vocal majority of WWE fans.

During all this time WWE has been spending trying to force fans to cheer Reigns, Dean Ambrose has been the guy that IS getting cheered by WWE fans; when Seth Rollins turned on the Shield, it became clear that Rollins was going to be the top heel, Reigns the top face, and Ambrose sort of just fell into the mix somewhere.  But over the past couple of years, as Ambrose has been cast in mid-card or underdog main event roles, the reactions to him have stayed the same and the majority of fans have stayed behind him.  Seems logical, push the guy that the fans are cheering, listen to the crowd, but for some reason that hasn’t happened until Money in the Bank last night.

Honestly, I was surprised to even see Ambrose win the Money in the Bank ladder match because it seemed he had become the “he almost did it” guy but never the “he did it!” guy.  He took on Brock Lesnar at WrestleMania, he took on Triple H prior to that….matches Ambrose was popular in but never the guy to win big.  When Ambrose did win the Money in the Bank briefcase, it seemed like him actually cashing in would be something WWE would have to milk forever as they do with everything these days, and a potential cash in last night was even less likely since they teased it last Monday.

Thankfully WWE pulled the trigger and shocked the world with a Dean Ambrose WWE Championship win which adds all new possibilities and matches that will surely enhance the whole draft situation which will take place soon.  With Reigns as champion, there really weren’t any intriguing matches because fans are going to boo him against anyone right now, but if Reigns is suddenly pissed off about Ambrose taking the title and can once again become the badass he once was….we may have something. I feel like one of the reasons Ambrose has remained popular is because he can pull off an edgy persona that didn’t have to change to fit WWE cookie-cutter standards as Reigns did.

Is Dean Ambrose the Rock of this era?  Not at all.  The Rock made the term “People’s Champ” as part of his cocky over the top heelish persona that made him a megastar; Dean Ambrose is literally the People’s Champ because the fans have been clamoring for a “good guy” they can actually cheer for and a guy they can feel like they helped get to the top.