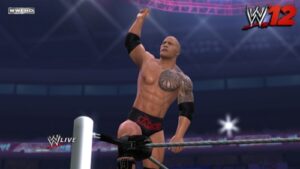 As you’ve all seen lately on WWE programming, the huge “WWE ’12” video game is coming out this week for PS3, Xbox 360, Nintendo Wii, etc.  Months ago we reported on the awesome roster on the game that even includes legends like Demolition, the Legion of Doom, Vader, Brock Lesnar, and more.   It’s coming out a little later this year than game releases in the past few years, and this time it happens to fall on Black Friday week which limits the deals you can find on it.

The game is already getting rave reviews and seems to have finally fixed just about everything that was previously wrong with WWE games.  Along with the already awesome roster, a stellar lineup of DLC is on the way for the game including Trish Stratus, Kharma, Batista, Mick Foley, and even “Macho Man” Randy Savage

So far it looks like if your want to buy the game in a store, Target will be the place to get it as they will have it available on November 22nd (this Tuesday) on sale for $47.  This price includes The Rock as a playable character without pre-ordering.  It looks like this price will only be in effect at Target for a couple of days before going back to the normal $59.99 price.

If you don’t mind ordering online, then Amazon.com is the place with the best overall deal on WWE ’12.  They are offering the $47 price, The Rock playable character, AND a $10 dollar credit toward your next Amazon purchase.  So far these are the only 2 special Black Friday week deals on WWE ’12, if you have seen any other let us know below in the comments.