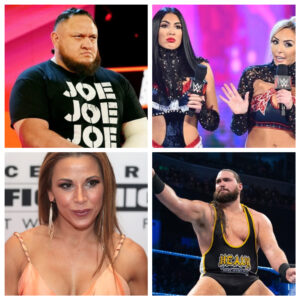 With WrestleMania 37 in the books, it’s apparently spring cleaning season in WWE as multiple name talents have been released today. This is all a bit of a surprise since the existence of AEW has seemed to slow the mass WWE releases we would see a few years ago, but today we got some pretty big eye-openers as names like Samoa, Joe, Mickie James, Billy Kay, and Peyton Royce are officially gone from the company.

Samoa Joe was just a couple of weeks ago still part of the RAW broadcast team, which leads us to believe that Joe may have been unhappy in the role and ready to return to the ring. If he is able, one would think Joe in AEW would make for some intriguing matchups.

Mickie James was also seen as recently as WrestleMania week as she served on the broadcast team for NXT’s “Stand and Deliver” events. James is one of the most celebrated women wrestlers in any company and undoubtedly has a spot in the WWE Hall of Fame, but is she done in the ring? She just competed in this year’s women’s Royal Rumble so she is another that we could see bringing big-name value to AEW’s women’s division.

Both Billie Kay and Peyton Royce have been released which is another surprise considering the “IIconics” duo was an entertaining one, and since they were put on separate brands, haven’t had the same impact. Billie Kay seemed to be involved in an angle that would lead to her finding a new partner, which she seemed to find in Carmella as they teamed up at WrestleMania, but that was apparently a very short-term thing. It’s interesting to note that Peyton Royce’s husband Shawn Spears is in AEW so the door is already open for both her and Billie Kay we would assume.

Other names on the release list include Bo Dallas, Tucker, Kalisto, Chelsea Green, and Wesley Blake. We’re not sure if WWE is done for today or not, and it should be interesting to see if AEW picks up any of these talents even if they all have to wait for a 90-day no-compete clause to expire.  Getting “future endeavored” always sucks for the talent, but having a second national company to look to is a big plus and could freshen things up a bit on both sides.