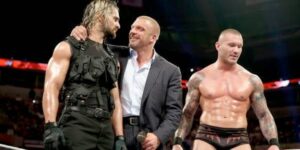 It’s been the talk of the wrestling world in the past 24 hours – the shocking turn by Seth Rollins on his fellow Shield members Dean Ambrose and Roman Reigns.  The move worked perfectly in that it got the audience talking, and even better wondering what will happen next.  The move shook up the groundwork that had been laid in these last few post-WrestleMania weeks, which undoubtedly added to the shock value of seeing Seth Rollins being the guy to break away from The Shield.

Traditionally, the weeks following WrestleMania each year are rather “slow” as WWE has to start from scratch and begin the build toward their next huge event while still wrapping up issues that carry over from the year’s biggest event.  The same can be said for this year, as the fallout from WrestleMania has continued on with John Cena vs. Bray Wyatt, Daniel Bryan vs. The Authority, and The Shield vs. the reformed Evolution being the main points of interest.  The Shield vs. Evolution has been intriguing on many levels; for one The Shield becoming the breakout “good guys” in the situation taking on a group of veterans in Evolution has been all about portraying the “new school” vs. “old guard” idea.

There had been talks way before WrestleMania even of The Shield breaking up and it was even teased for a few weeks with the group showing signs of animosity, but it seems like those plans changed prior to WrestleMania and instead the group became anti-authority heroes that have become some of the most popular in WWE in recent weeks.  It’s always been a common belief that Roman Reigns would someday be the main event singles star coming out of the group, but when that day came it always seemed like it would be both Rollins and Ambrose that turned on Reigns….and even so it seemed like that day would surely be at least months away before Monday night.

The Shield has won decisively (to an almost shocking level) over Evolution in their post-WrestleMania feud which has undoubtedly elevated the group (especially Reigns,) but Seth Rollins has become the breakout daredevil of the group that has also gained much popularity for his intensity and wild style.  On Monday night, similar to the situation in 1998 when The Rock was gaining much popularity with the fans before the plug was pulled and he became “The Corporate Champion” (a move that solidified The Rock as a main event star,) Seth Rollins turned on The Shield and stood side by side with Evolution members Triple H and Randy Orton.  The reaction was great, the shock was there, and it seemed already apparent that Seth Rollins became a bigger star than ever in just a few minutes.

The best thing about this move is that no one really knows what it all means; 24 hours prior, Rollins fought alongside Reigns and Ambrose in another war (and decisive victory) against Triple H, Randy Orton, and Batista.  What could Triple H have promised Rollins that made him turn?  Does the turn mean Rollins is now a member of Evolution?  Being in that group obviously elevated Orton and Batista earlier in their careers, and it would likely do the same for Rollins.  Or is Rollins simply on his own but as a hired gun for Triple H?  And of course what revenge will be extracted by Reigns and Ambrose?  A move that produces so many questions has to be considered a win, so it will be very interesting to see where things go from here.

WWE now has a new and intriguing heel in Seth Rollins and produced a story that fans will want to see play out.  The question is where does Rollins go from here?  Will he be a fall guy for Reigns to go through on his path to the top?  Or has WWE realized the younger Shawn Michaels comparison that follows Rollins around and will that equal the beginning of a main event career for Rollins?  We have a feeling the latter will be true, it’s just a matter of now or later.