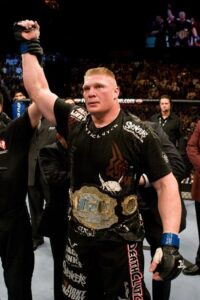 It was bad enough for MMA die-hards that hate Lesnar to watch him beat Mir convincingly, after months of build-up and hope that Mir would once again catch Lesnar as he did in their first fight, and take the win and title. No such luck as Brock came prepared this time and steamrolled Mir’s ass, plain and simple. What followed was Brock Lesnar solidifying his spot as UFC’s top draw and no doubt MMA’s biggest heel.

UFC is all about sportsmanship and respect, Brock Lesnar is about selling tickets and making money. Lesnar first let us know that he told Mir last year that he had a “horseshoe stuck up his ass” so he “pulled that sum bitch out and beat him over the head with it.” The crowd was enraged….then Lesnar pissed off Dana White as he cut on Budweiser for not paying him any sponsorship money and pointed out that he was drinking a Coors Light. Then he topped things off by saying he “might just get on top of his wife tonight (that being former WWE Diva Sable.

The crowd erupted in boos, Lesnar responded with a double middle finger for them, it was the WWE Attitude era all over only in MMA. Of course, now MMA purists are saying UFC is a work or the respect is gone, or it’s all about money. Well WTF people, UFC sells tickets, gets bigger and more popular, and people are mad? Do people actually think guys LET Lesnar win? Anyone saying that must not be watching because it’s stupid.

What it boils down to, is that people can’t get over the fact that a pro wrestler entered MMA, and answered the question people have had for years…”How would a pro wrestler do in a “real” fight?” Brock answered and answered loud, and now no one can handle it.

Now Brock is the main man in UFC, the man who people will buy pay per views to watch win, or the man people will buy pay per views to see who can beat him. It’s a winning situation for everyone and should be for MMA fans too, but they’re too busy bitching. To me, MMA is a hell of a lot more entertaining with some color and without every guy doing the same boring thing without any hype. Why does EVERY guy have to be respectful? Let them be themselves, let them talk shit if they want, just sit back and enjoy. I’ve never seen so much buzz in MMA.

Everyone is talking about Brocks’s fight, his promo, or who his next opponent could be. The winner Shane Carwin vs. Cain Velasquez could be the next opponent for Brock, but everyone knows that Dana White needs to give us the fight that will draw more interest than any other in the current MMA scene…that, of course, being Brock Lesnar vs. Fedor…and if that happens, the Brock hate will increase, right along with the cash streaming into UFC.