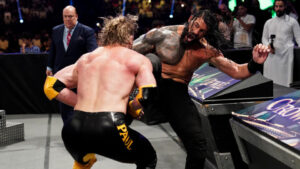 The 2022 edition of WWE Crown Jewel is in the books and saw many memorable moments and payoffs to stories that have been built over the past few months. It’s still refreshing to see every match on a PPV have a reason, and will hopefully remain a signature of the Triple H era. On to the results:

Brock Lesnar defeated Bobby Lashley – things started off red-hot with one of the main attractions starting the show. Lesnar and Lashley was the physical collision you’d expect, but Lashley was put over huge here as he put the Hurt Lock on Lesnar and Brock sold it to perfection. Lesnar was able to use the turnbuckle to fall back on Lashley and score the pin, but Lashley was the one elevated but this match.

Damage CTRL defeated Alexa Bliss and Asuka to regain the Women’s Tag Team Championship – Nice twist here being Bliss and Asuka just won the titles earlier this week. Knowing a company may have someone holding a title for 2 years or a few days adds a nice “anything can happen” vibe.

Drew McIntyre defeated Karrion Kross in a steel cage match – Good way for Drew to get a victory in this feud without Kross looking weak. Scarlett played a big role here by interfering several times. Should be interesting to see where this feud ends up going next.

The Judgement Day defeated The O.C. – A continuation of the feud between these two groups, and once again Rhea Ripley is the deciding factor in the match. This all still seems to be leading to the OC bringing in a female to counter Rhea.

Braun Strowman defeated Omos – say what you will about matches with giants who aren’t doing flips, but this was good for what it was. It was a spectacle with two giants, the bigger of whom (that being Omos) overpowering Strowman for the vast majority of the match before Braun pulled off his powerslam for the win.

The Usos defeated The Brawling Brutes to retain the Undisputed Tag Team Championship – Didn’t expect much here besides a basic tag match, since the Usos are part of one the biggest stories going as members of The Bloodline. The Usos are close to breaking records with this title reign, so a victory was pretty much expected.

Bianca Belair defeated Bayley in a Last Woman Standing Match to retain the RAW Women’s Championship – These two went all out using weapons, a golf cart, a table, etc. Belair trapped Bayley under a ladder to retain the title. This feud will likely continue with Bayley pointing out that she was never pinned.

At this point, we had Bray Wyatt’s appearance on the show where he cut another promo similar to the ones we’ve heard on SmackDown. Again, Bray’s “Uncle Howdy” interrupted and talked about things no one is really clear on yet. Interesting here that Bray mentioned his “famous wrestling family” which was a nice touch as this unique story continues to build.

Roman Reigns defeated Logan Paul to retain the Undisputed WWE Universal Championship – Yet another unbelievable performance by Paul. The guy was on his third match and already performing at a level where he looks like he fits right in. The Bloodline interfered and beat down Paul’s crew who was at ringside, which brought out Jake Paul who came off like a major star. Jake took out the Usos, which brought out Solo Sikoa and the two had a standoff at ringside. Jake Paul vs. Solo instantly felt like a match we need to see. Reigns picked up the win as expected, but the athleticism of Logan and the presence of him and his brother are already next-level.

Check out the unique video of Logan Paul recording his own dive on Roman Reigns to the outside of the ring below: