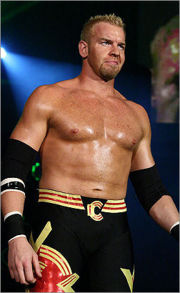 Well, the rumors were true, Christian is back in WWE, but the much-talked-about story where Christian would be Jeff Hardy’s attacker, leading to a huge Wrestlemania match between the 2 totally went out the window. First, it played out that Matt Hardy was the man behind the attacks on Jeff, so apparently, we’re looking at a Hardy vs. Hardy match at Wrestlemania.

So with that said, it looked like Christian would probably pop back up helping Edge somewhere or maybe still involved in the Hardy feud somehow. Then tonight, on the usual Tuesday night ECW slot that only a portion of WWE fans watch, Christian interrupted Jack Swagger, says he’s back for the ECW belt, and has his first match back, beating Swagger in a non-title match. Really?

Christian got a big pop, and was over instantly with WWE fans again, which leaves everyone asking, why no hype? And why on WWE’s “C” show? Somehow Christian went from coming back and being put right in a major story leading into Mania, to just coming out and having a match out of the blue against Swagger. Is this WWE’s way of saying “Welcome back Christian, but let us remind you that you still owe us for leaving”?

Christian is a veteran talent, who’s been in the big-time matches, and could jump right into the mix and improve the shows, so it’s pretty odd that most people are going to have to read about his return on the net since ECW is the least-watched brand. Christian should at LEAST be the ECW champion if that’s the brand he’s stuck on, but hopefully, the reaction he got will show the higher-ups that he belongs on Smackdown or RAW and his return won’t turn out to be a total waste.

Hopefully, WWE will wise up before Wrestlemania so Christian can get a decent spot, as I can see him at least being a guy that would have a good reason to be in the Money in the Bank ladder match given his history.