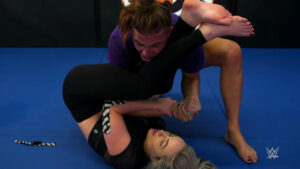 WWE under Triple H’s creative control has been highly interesting to watch as we’ve seen new stories created and characters already having much more depth. Case in point, if you told me 3-4 months ago about an upcoming Liv Morgan vs. Shayna Baszler match, I’d assume it was a throwaway TV match. Yet here we are now with that exact match set for WWE Clash at the Castle and watching the build for not only the match, but each ladies’ character has been an example of exactly what WWE has needed.

Shayna Baszler was once the seemingly unbeatable NXT Women’s Champion who is a legitimate former MMA fighter. After moving to the main roster, Baszler was just another wrestler thrown in the mix and winning and losing matches like any other wrestler. With Triple H now in control, Baszler is back to her former ruthless character who uses her MMA skills for true devastation.

Liv Morgan has been on the main roster longer than Baszler, but has also been mostly lost in the mix. She’s been in groups, she’s done some angles, but we never really knew a whole lot about her other than she was an underdog. Ever since winning the Money in the Bank briefcase and then cashing it in on Ronda Rousey, entirely new dimensions of Liv Morgan’s character have been opened. While she’s the underdog champion, watching her find ways to keep her title against a variety of challengers has been a key to building interest in the SmackDown Women’s Championship.

That brings us to today’s video; now that the build to Clash at the Castle is in full swing and Liv Morgan is set to defend against Baszler, what would be the logical move for Morgan to make as far as her training? Well, training with an established MMA star of course. We know Ronda Rousey is out since she’s not only feuding with Morgan but also since she’s longtime friends with Baszler. So who else could Liv Morgan train with that would make sense? Riddle of course.

Some of you may have forgotten or not even known that Matt Riddle is a successful former MMA fighter who competed in UFC. If you weren’t aware, it’s probably because WWE has portrayed him as an idiot for the most part, because that’s how they handle anyone that is marijuana friendly over the years. Since Triple H took over, we’ve seen a much more serious Riddle who has dropped a lot of the WAY over-the-top persona that made him seem like anything but tough.

These types of storyline crossovers between characters make so much sense and really can make a difference in a match. Seeing the preparation and extra effort Liv Morgan went through in order to defend against an established MMA pro really brings back a lot of the old feelings of the time when PPV matches mattered. While it’s still very early, little pieces by the bit below have the future looking very bright under Triple H’s creative vision: