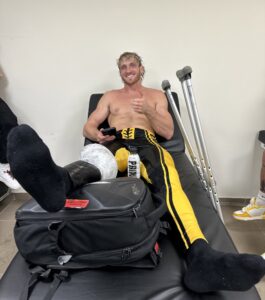 Social media superstar Logan Paul may have had yet another unbelievable in-ring performance at Crown Jewel, but he has now announced that he has suffered injuries that will undoubtedly keep him out of the ring for the foreseeable future.

Paul took to social media to announce that he tore his meniscus, MCL, and possibly his ACL. This type of injury would obviously mean surgery and a good amount of time off. Maybe the craziest part of Paul’s injuries is that he claims they happened halfway through the match! Of course, being pro wrestling, this could be some sort of angle to keep him off TV for a bit, but as of this writing, the injuries appear to be legit.

While Logan Paul’s wrestling career has been an uphill battle, his performances speak for themselves. Here’s to hoping he can come back and continue to add to the fresh feeling vibes in WWE.