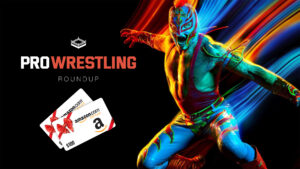 We at Pro Wrestling Roundup wanted to celebrate reaching over 15 thousand likes on our Facebook in a big way, and what better time to do it than WrestleMania week? With the release of the first WWE console game in over 2 years, WWE 2K22,  we decided to celebrate its release as well! What we’ve come up with is holding a giveaway for a $100 gift card to go towards the purchase of 2K22 on the console of your choice!

If you’ve kept up with the coverage since the game’s release, 2K22 definitely “hits different” with its redesigned engine and what have been called the best graphics ever in a WWE game. Since we know there are such a variety of ways to play these days between PS4/5, Xbox One, PC, etc., giving away a gift card toward the game seemed like the way to go.

While it’s been out for a couple of weeks now, most of you know that things are really just beginning as DLC packs for WWE 2K22 are on the way featuring celebrities like Machine Gun Kelly and Logan Paul, legends like Vader, Mr. T, and Cactus Jack, as well as current stars like Ronda Rousey, Omos, and Rick Boogs.