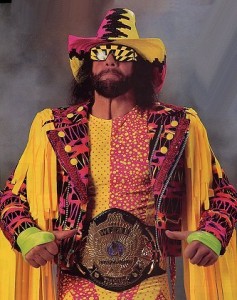 The upcoming video game “WWE All Stars” just got a major boost in interest, as part of the announcement of the initial roster was the one and only “Macho Man” Randy Savage.  If I’m not mistaken, this is the first WWE game to feature the Macho Man since the “Royal Rumble” game from the mid-’90s on Sega Genesis and Super Nintendo.

As a bonus we get a promo from the Macho Man himself that features such great delivery, it once again shows us how certain legends should still be delivering on TV and showing the new era how it’s done.  Macho’s first interaction with WWE in years was in 2010 when Mattel announced we would FINALLY be getting a line of Macho Man figures, which has been probably THE most requested figure over the years but couldn’t get finalized until recently for one reason or another.  With Macho getting figures and now involved in games…..does this mean a WWE Hall of Fame induction or even a return to WWE TV is out of the question?

The WWE All Stars game itself is an over-the-top arcade-style game, which means realism isn’t what’s being aimed for here.  Think of “NBA Jam’s” over-the-top antics for a basketball game, only in wrestling form.  The characters are exaggerated, as are the moves, so this isn’t the type of simulation-style that WWE’s “Smackdown vs. RAW” series goes for.  I really prefer the more realistic wrestling games so this All Stars game looks like something I may play for a while and have some fun, but may not have much long-term interest in.

The partial roster is listed below, followed by the great Macho Man promo along with footage from the game.  “WWE All Stars” is in stores March 29, 2011.