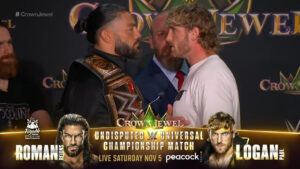 As we reported yesterday, Roman Reigns vs. Logan Paul will headline WWE’s next Crown Jewel event from Saudi Arabia on November 5th. The match was made official just a short while ago at a press conference held in Las Vegas.

While there is obviously a vocal portion of fans that remain unaccepting of Logan Paul and especially him stepping into a WWE Universal Championship match so soon, the way the match is being presented makes a lot of sense in the grand scheme of things. There have been many references to Paul’s boxing match against Floyd Mayweather, and that in itself was an attraction and spectacle. No one thought Paul was anywhere near Mayweather’s level as a boxer, but the “what would happen if” factor garnered enough interest to make it a hugely successful event.

At today’s press conference, the Reigns/Paul match was presented in much the same way. Triple H being present at the event and explaining how things came to be really added to the hype. This match really breaks up the monotony of recycling the same matches for seemingly years in some cases. A ‘disruptor” with a huge following and presence getting a once-in-a-lifetime shot is quite a story and one that non-wrestling fans who may only follow Paul’s career can still invest in.