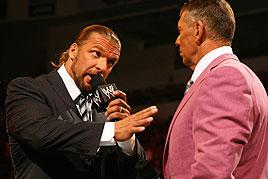 On the heels of the highly controversial CM Punk WWE Title win, RAW delivered an even bigger shock that feels even more real.  I thought it would be years before I would be writing a post that announced Vince McMahon was passing the torch of running WWE to Triple H.  As far as on-screen goes, that looks to be what happened earlier tonight.

Vince kicked off RAW by announcing that there would be a one night tournament tonight to crown a new WWE Champion, and Punk’s name wasn’t even to be mentioned.  The tournament featured good matches with clean finishes, which really stood out on the show.  The finals of the tournament ended up as Rey Mysterio vs. The Miz, but before the match began Vince came out and postponed it until next week due to time constraints since he had to fire Cena to end the show, per the Money in the Bank stipulation.

Cena came out for his firing, but informed Vince that if he was indeed fired, he would “walk on to another show and continue doing this……..BROTHER!”  The reference to Hogan/Impact was awesome, and felt like change was most definitely in the air since saying something like that hasn’t been allowed in years.  Vince continued with his firing, until Triple H’s music hit, as The Game returned to a huge pop.  What followed could be a defining moment that could be looked back on as the beginning of a new era.

John Cena took to the background, as Triple H informed Vince of some news no one saw coming.  He explained that there was a board meeting, and the board was concerned about Vince’s “questionable actions of late.”  And with that……Triple H informed Vince McMahon that he was relieved of his duties, and that he would be taking over the day to day operations of WWE.

Say what you will about this being a story, but it’s been known that Vince has been grooming Triple H to take over WWE one day for a year now.  The story we saw on TV is most likely emulating real life.  Vince and Triple H were both in tears, and the emotion the angle produced was amazing.  In reality, Vince will always keep  an executive role, and will likely always  play a part in running WWE, but WWE is making big changes and many are speculating that Triple H has a lot to do with that.

In the last few weeks, WWE has brought very real situations to TV and put an entertaining spin on them.  The angles are so real, no one can tell where the line of reality ends.  This of course is great for wrestling, and has mainstream media outlets along with  current and former fans alike coming out of the woodwork to see what’s going on.
My take is that tonight we saw the end of Vince McMahon as a character on TV.  He will always be a part of WWE but a new era is upon us, and Triple H will be the new face of corporate WWE, at least on TV.  All the changes in recent  weeks have been great, and if Triple H is indeed behind them,  it was time to make this move.  The emotion was  so real and it was obvious Vince was symbolically passing the torch to Triple H.    There will be such a huge amount of interest going into next week’s RAW, and  the momentum from these last few weeks could really kick into high gear.

For anyone that has seen Vince run WWE their entire life like myself, it’s so hard to grasp that he really could be stepping away from being  the head of day-to-day operations.  The “thank you Vince” chant that ended RAW will likely never be forgotten, and this story might turn out to be just what WWE needs.  Realism, great matches with clean finishes, and real stories that people want to follow.  Thank you Vince indeed…for everything…including  stepping aside at the  right time so the business can evolve and once again connect with the fans.