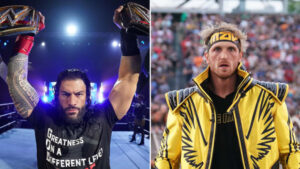 In the last few days, something has been brewing on social media that seemed like it could lead to at least a confrontation between Logan Paul and Roman Reigns. There was back and forth online involving Logan, Paul Heyman, Reigns, and finally, Triple H who reminded them he had a platform in SmackDown for his Superstars to air their grievances. But before SmackDown even goes live tonight, Dave Meltzer reports that a press conference will be held tomorrow in Las Vegas to announce Roman Reigns vs. Logan Paul at WWE Crown Jewel in Saudi Arabia on November 5th.

Of course, this match is going to stir up every emotion from fans, ranging from absolutely hating a newcomer like Paul main eventing a huge show already, to those that have been blown away at how he already seemed like a seasoned in-ring veteran after only two official matches. Another train of thought might be that this is a match you wouldn’t expect, it’s not a rematch from one we’ve seen several times already, so once again it seems like a case of Triple H trying new things.

No official word on if this will be a title defense with Reigns defending his Undisputed WWE Universal Championship, but it would make sense given how big of a show Crown Jewel will be. Logan Paul facing off against Reigns, who has had a historic run as champion, will definitely be a headline grabber. Like him or not, Logan Paul is a massive name that will draw outside attention to this match.

Are we looking at a possible title change in this Crown Jewel main event? Highly unlikely. Are we looking at Logan Paul gaining even more respect if he can hang at Roman Reigns level? For sure. With Triple H steering the shop, there are many possibilities coming out of this match and it’s great to see a fresh match that isn’t just another rematch with a stipulation added.

This whole thing looks like it will officially kick off tonight on SmackDown, followed tomorrow by the press conference in Las Vegas, and finally, Crown Jewel airs on November 5th on Peacock.