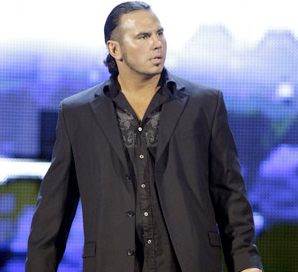 Over the past few days, there have been numerous reports about Matt Hardy being “sent home” from shows, most recently during WWE’s tour of England.  There haven’t been any concrete details about why, other than unconfirmed reports about Hardy’s “condition,” which suggests something involving drugs and/or alcohol.  In the past few weeks, Hardy has been on his official Twitter page dropping hints about “change” and no longer being held back.  Many believe Hardy was unhappy with his current role in WWE, and if so he has good reason.

Matt Hardy seems to have been stuck in neutral for at least a couple of years now.  He gets good reactions at shows, but rarely gets put in a big angle, and if he is, the purpose is to elevate someone else.  A few years ago when Hardy was released from WWE due to his behind-the-scenes drama involving Edge and Lita, he gained an internet and “smart fan” following due to the way he was handled in being released by WWE.  WWE saw the fan response and brought back Hardy to feud with Edge, at first making it look like Hardy was running in and attacking on his own without being a member of the WWE roster.  When the feud was carried out, Edge came out on top and moved on to bigger and better things, while Hardy just went back to being a regular WWE guy again.

Even though Hardy has pretty much been wasted booking-wise, he is still way over, and could still thrive elsewhere, most notably in TNA where he could potentially reunite with Jeff for a TNA Hardy Boyz run.  The problems with WWE are more evident than ever, as Hardy posted a video where he proves he wasn’t “sent home” although he’s just playing on the wording of the situation, and doesn’t deny that there were problems and did not appear on the shows mentioned.  Some of the “journalists” on other sites have speculated on Hardy’s condition in the videos, but that topic is left to viewer perception as of now.  If the change Hardy is talking about is indeed a move away from WWE, it will definitely be a good move in my opinion.  Hardy is not at tonight’s Smackdown tapings, and WWE has confirmed that Hardy was taken off the road by WWE despite his video implying that he wasn’t.