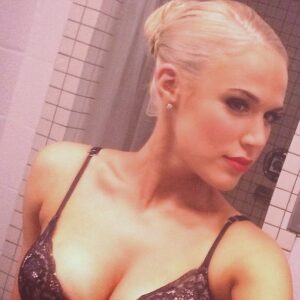 WWE Superstar Rusev has quickly become the fastest rising star in WWE in the past year; his undefeated streak capped off by his interaction with The Rock a couple of weeks back on RAW have solidified the fact that Rusev will be a major player in WWE for the foreseeable future.  One major part of Rusev’s success has been his mouthpiece, the “Ravishing Russian” Lana who has done almost all of the talking for Rusev in the past year and in the process made herself a heat-seeking magnet in WWE.

Of course, these days when any new WWE character debuts with an accent of any sort, questions immediately arise as to whether their nationality is legit or just character; in Lana’s case, she was born Catherine Joy (C.J.) Perry and actually did grow up in the Soviet Union for a few years as a child.  While her accent may not be legit, the way Lana performs and her ability to speak Russian surely adds to the character; of course, none of this means Lana doesn’t have quite an interesting history here in the U.S. prior to joining WWE.

It’s hard to imagine the super-uptight Ravishing Russian that comes out and berates American fans week after week for their country’s inferiority “twerking,” but that’s exactly what has been uncovered in the music video below.  Lana is actually an accomplished dancer, having danced at multiple schools since the age of 14…..none of which probably taught the art of “twerking”…nonetheless Lana seems to have mastered the move believe it or not:


Now if that wasn’t enough to of seeing Lana in a totally different light, the fact that she has also done a series of nude modeling photos will definitely do the trick.  That’s right, Lana has posed naked on multiple occasions, and shockingly that didn’t keep her out of WWE since they are down on such things these days.  These pics are definitely hot, and Lana isn’t shy about showing every bit of her naked body…so much for the “proper” Russian values she preaches on TV.  Being some of these pics are fully nude, we won’t show them here due to the wide range of age groups that visit our site, but for those of you that are 18+ check out the full set of nude Lana pics.
5Shares
Tags: Lana, WWE, WWE Divas