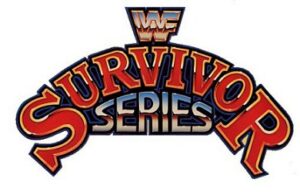 Special edition of “Remember When…” today in honor of Thanksgiving. How many of you out there remember the days when Survivor Series was one of the highlights of the Thanksgiving holiday? Originally held on Thanksgiving night, then on Thanksgiving eve in later years, Survivor Series was such a great part of enjoying the holiday for anyone who was a fan in that era. The excitement leading up, seeing who would be on who’s team in the 5 on 5 elimination matchups was great in itself. The possibilities of what could happen if it came down to 3 on 1, 4 on 1, or even 5 on 1. So many possibilities, and often times the outcome was highly unpredictable.

In the first Survivor Series in 1987, what better main event team captains than Hulk Hogan and Andre the Giant, who hadn’t stepped in the ring together since their epic Wrestlemania 3 match six months earlier. In fact, Andre hadn’t wrestled at all since then. Andre’s team featured two other giants, King Kong Bundy and One Man Gang, and the team was rounded out by Ravishing Rick Rude and Butch Reed. Hulk’s team consisted of highly touted newcomer Bam Bam Bigelow, and three men who had often been heels fighting Hogan in the past – “Mr. Wondeful” Paul Orndorff, Ken Patera, and Don Muraco (who was a last-minute substitute for Superstar Billy Graham who was put out by the One Man Gang. The obvious ending would see another Hogan and Andre showdown, but not in the greatness of Survivor Series. Hulk was actually counted out, leaving a 3 on 1 situation for Bam Bam Bigelow….who almost pulled out the win, but was stopped in his tracks by Andre…the sole survivor.

In the following years, many great team matchups were held, with 1990 even featuring a “Final Match of Survival” with all the winners from each match having one final elimination match, which was won by Hulk Hogan and The Ultimate Warrior. 1991 was the first Survivor Series that featured a WWF Heavyweight Championship match in addition to the traditional elimination matches. On that night, Hulk Hogan lost the WWF Championship to the Undertaker (who had just made his historic debut one year earlier at Survivor Series 90) in a shocking turn of events. In 1992 the Survivor Series featured regular matches to change things up. The change was OK and it was still a fun show, but in 1993 the traditional format was back and remained for the next few years. Eventually in the mid-’90s, the Survivor Series was moved to Sundays like all the rest of the WWE pay-per-views nowadays. At first, the change wasn’t horrible, still some good Survivor Series shows. But of course, now WWE is stale, and Survivor Series is just another PPV like the rest of them, with the same guys we see wrestling each other every week on RAW and Smackdown. Thankfully, the WWE Survivor Series Anthology has been released, and the magic can be re-lived every Thanksgiving by popping in a DVD.

So while most people have football as their Thanksgiving tradition, the hype, the action, the true tradition of Thanksgiving, will always be the early days, of The Survivor Series. Below is the main event from the very first Survivor Series in 1987…Team Hogan vs. Team Andre, complete with the pre-match interviews and hype: