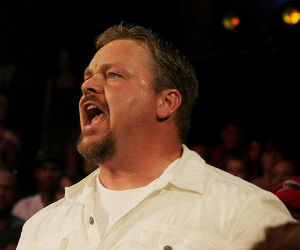 ….or at least he sort of….tried to.  Last night on RAW in Philadelphia, if you happened to be looking at the crowd instead of the Kane vs. Big Show match, you might have seen someone in a mask stand up and take the mask off briefly, and that was about it.  What was going on was “The Franchise” Shane Douglas of ECW fame, trying to cause a stir in the crowd to hype his upcoming “Extreme Reunion” show in Philadelphia…..it didn’t really work.

The video below shows someone sitting next to Douglas and filming all of this, as Douglas stands up, removes his jacket and mask, and gets a small reaction from the people around him.  The guy filming chants “ECW!” constantly in an effort to get an old 90’s style “ECW!” chant started, but it just wasn’t there.  Half the problem had to be that Douglas really hasn’t been in the spotlight in years, and visually doesn’t warrant the ECW response that a Sabu/Tommy Dreamer/Sandman would have.

Even though the stunt didn’t go over huge live, there is a lot of talk about it on the Internet.  I don’t know if it will mean anything for this new “Extreme Reunion” venture, but as they say, any publicity is good publicity.  The word is that after this inaugural reunion show, future shows will blend in new stars that turn this into an ongoing promotion.  They have a long road ahead as far as gaining anything close to the die-hard following ECW had as evident by the video below.  It really seems that without Paul Heyman as the face of any of these ECW comebacks, the idea is just flat unless they can come up with something truly new and fresh.  Check out Shane Douglas’s RAW invasion below: