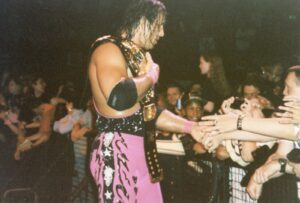 Don’t call it a comeback necessarily, but one of the most legendary figures in the history of pro wrestling won the most dangerous and scary battles in his life and returned to WWE recently. Bret “The Hitman” Hart, the WWE Hall-of-Famer who has had a frosty relationship with the company over the years, returned from a hiatus to be in the corner of his niece Natalya as she took on Charlotte for the WWE Women’s Championship.

But Hart’s relationship with the WWE wasn’t the primary concern about his possible return over the past few months after he announced back in February that he had been diagnosed with prostate cancer. The news was obviously devastating to Hart’s legion of long-time fans, but surely nothing like the scare that The Hitman had himself upon getting the diagnosis.

Thankfully for everyone, including those of us here at Pro Wrestling Roundup, Hart stays on top of his health regularly. Prostate cancer has a 96% recovery rate when it’s caught early, and this was the case for Hart. The procedure to remove the cancer has been described as successful by Hart. According to what he told WWE, the cancer appears to have been contained within his prostate and not spread before his doctors caught it and removed it. Pro wrestling rumors are known to spread wildly and quickly, but despite what you may have heard elsewhere recently it appears that this is the actual story.

Hart says he’ll continue to get checkups every three months for the next couple of years, then once per year, and that eventually he’ll be declared cancer-free.

His return to WWE wasn’t in the ring, but rather to support Natalya from her corner. This is likely because of the fairly regular events where Charlotte’s own father, the legendary Ric Flair, has been seen as interfering to ensure his daughter doesn’t lose her title. Of course, Charlotte ended up keeping her title, but we did get to see Bret apply the Sharpshooter to Flair one more time.

Of all the battles Bret Hart has faced in his long and illustrious career in professional wrestling, there’s no doubt that his recent battle with cancer was the most dangerous. In traditional Hitman style though, Hart has defeated yet another opponent – one that was intent on killing him. Even if he fades from the scene once again in the near future (which isn’t likely considering the media coverage he’s had lately), this episode will surely be considered his greatest victory, as it should be.

That doesn’t mean that we won’t be anxiously hoping to see him more involved going forward.