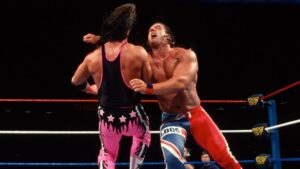 As WWE Clash at the Castle takes place this week in Cardiff, Wales, we couldn’t help but make note of the 30th anniversary of SummerSlam 92 – the last UK stadium show to date. Of course, the legendary Bret Hart vs. British Bulldog Intercontinental Title match is the most memorable match from that card for most.

Personally, the build to the Bret vs. Bulldog match began with my delivery of the WWF Magazine earlier that summer. For anyone that was a subscriber, you know you’d get your issue via mail before it was available on newsstands. Many times, the magazine revealed things that hadn’t been announced on TV yet, and the card for SummerSlam 92 was one of those things.

I’ll never forget opening the page and seeing Macho Man vs. Ultimate Warrior was the main event. There was no build, no angle, just the two top good guys battling for the WWF Championship, in almost the same vein as Hogan vs. Warrior two years prior. But wait, what was this? Upon scanning further down the page, ANOTHER battle of the “good guys!?” Yes, Bret Hart vs. The British Bulldog, another match without an angle or story, but more of a “hey these title matches were made based on contendership” situation.

The SummerSlam 92 Intercontinental Title match has become legendary, and was rightfully the main event of the night, even though it was odd back then since the world title match was usually last. Bret Hart has gone into great detail about the match in several interviews, including revealing that the original SummerSlam match was Bret vs. Shawn Michaels in a ladder match.

At the time, The British Bulldog’s victory felt like a passing of the torch moment, with Bret seemingly done with his run as IC Champion and no real direction – little did we know much bigger things were ahead just a couple of months later. As far as Davey Boy Smith, it felt like he would be leading the way for the Intercontinental Title after this victory, but as Bret Hart has revealed, Smith was really only a placeholder until Shawn Michaels began his historic run with the title.

Relive the full Bret Hart vs. British Bulldog Intercontinental Title match from SummerSlam 92, and then below that check out a Bret Hart interview where he reveals how it all came to be: