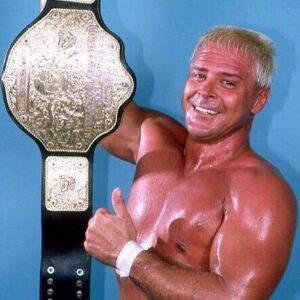 It’s time to bring you another edition of our popular “Remember When…” series and today’s topic is one that has been talked about and debated by old school NWA fans for years. The year was 1987 and the legendary Four Horsemen were in the midst of their prime in the NWA. Ric Flair had been the NWA World Champion for over a year after regaining the title from Dusty Rhodes and it wasn’t clear who the next real threat to his title would be. A series of events that played out over the summer of 87 would lead Ron Garvin to become the next champion, but only for a short period of time.

As a kid this was quite the story to keep up with – Ric Flair being the playboy that he was began taking notice of “Gorgeous” Jimmy Garvin’s valet Precious. Of course, this led to animosity between the two and of course a match. Now in this era of wrestling, it was clear that every guy’s goal was to be world champion and it felt like most could pull it off on any given night. The hype for Jimmy Garvin vs. Flair was huge and the match was set to be held in a cage. Not only that, but a “date” with Precious would also be on the line if Flair won.

When the match took place I remember feeling like Garvin would pull this off, as there was no way he would let his valet/wife go on a date with Flair. In the actual match, Flair targeted the leg as he did so many times in the 80s, and defeated Garvin after he could no longer take the pain. After the match, The Nature Boy seemed ready for his date with Precious right then and there as he took her by the arm before Jimmy’s brother Ronnie got involved and knocked flair out – the stage was set for the next chapter.

Of course, Ronnie Garvin interrupting Flair’s plans to take Precious for a ride on Space Mountain led to an even bigger feud between the two. Although Ric was now pissed at Ronnie Garvin, that date with Precious was in no way forgotten. The date between Flair and Precious may be one of the most memorable parts of the story for many. Seeing Flair strut around his hotel in preparation, only for Ron Garvin to show up in drag and again knock him out – truly memorable stuff that you didn’t see too much of in this era.

From that point on the hype for Garvin began – music videos, promos, none of it seemed out of place to me as a kid since Garvin seemed like a viable contender.  Looking back now, it seems many people didn’t understand the hype since Garvin had faced Flair many times in the years prior so a match between the two was nothing new. But in that era, Flair feuded numerous times with Dusty Rhodes, Nikita Koloff, the Road Warriors, and many others so it didn’t seem out of the ordinary. The real excitement was finding out that the Flair vs. Ron Garvin match (once again in a cage) would actually air on TV (not all major matches did in this era.)

I remember turning on the NWA’s syndicated show “Worldwide Wrestling” as it began right away with the cage match. One thing that really sold me about matches between Flair and Garvin was how hard they hit each other – it was tough to say these guys weren’t fighting for something meaningful when you saw (and heard) them in the ring. At the end when Ronnie Garvin came off the top rope with a sunset flip and pinned Ric Flair for the title, the crowd in Detroit erupted and a celebration was had in the ring with all the “good guys.”

As a kid and die-hard wrestling fan in this era, this is what it was all about. A good guy pulling off the huge win over the cheating bad guy and now a fresh set of challengers would be lining up. The problem was Garvin only held the title for just over two months before losing it back to Flair and we barely got to see him defend the title. As a kid I looked at it as just one of those unlucky things for the good guys; as an adult, it’s more clear as to what was going on and what other options may have been possible.

It wasn’t until the age of the Internet that I realized how many fans look down upon Ron Garvin’s NWA Title reign. He was looked at as an undeserving champion who probably wasn’t the best choice. Booker Dusty Rhodes gets a lot of the heat since many feel Barry Windham would have been the better choice at the time, but being a short-term champion just so Flair could get it back at Starrcade was said to be a spot Windham didn’t want.

Looking back at Ron Garvin’s NWA Title win reminds me of why I got hooked on wrestling. On any given show, a guy could pull off an upset and change the whole wrestling landscape. We didn’t watch wrestling and rate guys on how well their “performance” was – if a guy was tough, he was championship material. Ron Garvin fit the role of the underdog that pulled off the unexpected victory and it brought even more excitement to a golden era in pro wrestling.

Below we’ve included the full Ric Flair vs. Ron Garvin cage match from Worldwide Wrestling. If you’re an old-school NWA fan, what are your thoughts? Was Garvin the right guy for the role? Or should Dusty Rhodes have taken a completely different direction? Let us know in the comments below.