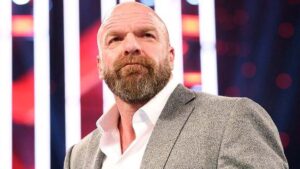 The aftermath of Vince McMahon’s retirement from WWE continues to unfold and today one of the biggest moves has officially been made as Triple H has been named the new head of creative.

This one is a real eye-opener since it seemed to many like Bruce Prichard may continue in the head of creative role so as to not shake things up too soon, yet here we are. Another big part of all this is many reminiscing about NXT’s glory era which was run by Triple H, and now he has that same role for the entire company. The thought of Triple H taking back control of NXT was big, but the head of creative for the whole company completely changes the…game.

The term “long-term storytelling” is being thrown around a lot since many feel this is something Triple H can bring back to the company, but our first thought was back to 11 years ago on RAW when Triple H stood in the ring and “relieved Vince McMahon of his duties.” Yes, that was a storyline that ended up meaning nothing, but now we’re in 2022 and all of this is very real.

Things should get very interesting from here, will we see signs of the new regime tonight as RAW takes place at Madison Square Garden? Will this Saturday’s SummerSlam be shaken up at all? Or will Triple H use the post-SummerSlam RAW as a launch point for the new era? Any of this is possible, or we may see subtle changes over the next few months.

One thing is certain, the word “change” has been thrown around WWE for years, and now it is officially upon us. It’s going to be an interesting ride with Triple H finally given the freedom he had in the original NXT. One thing, in particular, we’ll be looking for is whether or not Triple H will use Paul Heyman in the creative process, which is something that seems like it should have been a given for years now, but hasn’t truly been.