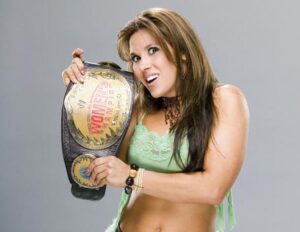 Two years ago a diva debut that was different from all of the other untalented sl*ts that the WWE had on its roster at the time and her name was Mickie James. When Mickie debuted she was an obsessed Trish Status fan, just like many of the WWE fans, but unlike all the other divas, she did not need training. She was already talented and had done lots of indy work before her WWE debut as Alexis Laree. When she came to the WWE she used her real name and got over with the crowd by being a psychotic lesbian, even exchanging kisses with Trish Stratus on more than one occasion. The feud ended when Mickie defeated Trish for the WWE Women’s title at Wrestlemania and Trish got injured in the Backlash rematch.

Many of you know that I am a Mickie mark, but my opinion of her is not biased. Mickie James is a beautiful and talented woman that gets a bigger crowd reaction than some of the males on the roster that are being pushed. Lets just hope that when Beth Phoenix gets the title away from Candice Michelle, that the perennial underdog of the WWE Women’s division will get another chance to hold the gold. A long feud for the Women’s title is just what the Division needs, and Mickie James vs Beth Phoenix is just the feud to do it. Both diva’s give it all they got when they are in the ring and that is what counts.

Mickie has shown that she can get it done time and time again in the ring. She is willing to do lesbian story lines which is a big plus in the minds of most men who watch RAW week after week. It is time for her to get reprieved from Heat and put back on the main show because that is where she belong. Put her in a decent feud and give her back the title. The WWE needs to stop divas titles and title shots to people just to sell merchandise and give it to people that can actually pull off a good match. Help save the Women’s Division and Push Mickie James.