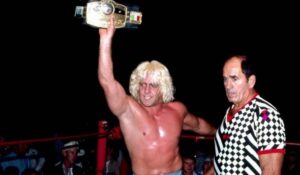 Regardless of how anyone feels about Ric Flair returning to the ring one last time, it’s tough to argue that the build for it has been outstanding. That fact has been once again solidified by the first part of the Ric Flair’s Last Match documentary on YouTube.

The piece looks at Ric Flair’s career with comments from the likes of Magnum T.A., Nikita Koloff, Jay Lethal, David Crocket, and more. The real depth comes from an interview with Ric’s first wife Leslie, who holds nothing back when it comes to sharing her thoughts. Also, the discussion of Ric’s late son Reid along with the sharing of the 911 calls prior to his death felt like there was zero sugar coating on Flair’s life and career in this documentary.

For old-school fans, this really feels like a trip in a time machine, when the build, hype, and talk were such a huge part of the pro wrestling equation, to the point that the end-product didn’t have to be put under a microscope because the ride to get there was just so good.

Check out part 1 of the Ric Flair’s Last Match documentary, which already has us waiting for part 2, which will likely include the announcement of the participants in Ric’s match on July 31st: