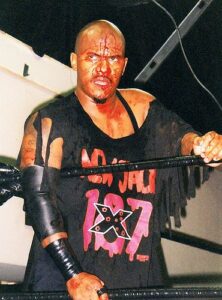 One of the most controversial figures in pro wrestling history has passed away as New Jack (Jerome Young) died after suffering a heart attack, he was 58.

New Jack was best known for his time as one of the most recognizable acts in ECW; first debuting as a member of “The Gangstas” tag team with partner Mustafa Saed after making their name in Smokey Mountain Wrestling under (of all people) Jim Cornette.

Jack went on to become a staple of ECW and is probably one of the main reasons the company was looked at as a “blood and guts” promotion. New Jack’s promos were some of the most memorable in ECW history, but his violence and at many times controversial incidents are what he may be remembered for most. Jack was just profiled on the series “Dark Side of the Ring” and many of those topics were covered in-depth with the man himself.

New Jack even had a highly memorable role in the film/documentary “Beyond The Mat” in 1999 where it looked like he may even make the jump to Hollywood at the time. As the years went not though, Jack remained in pro wrestling and his gimmick evolved into mainly just hitting the ring with a pile of weapons and inflicting damage the likes of which is rarely seen on today’s wrestling scene.

While we won’t delve into New Jack’s controversial history since one could literally spend hours on them between stories and actual videos, all we can say is that New Jack created a character that was highly memorable (whether it be for all the right or wrong reasons) and was a staple for a wrestling company that will be talked about until the end of time. RIP New Jack.