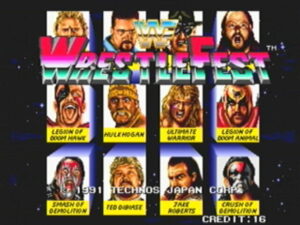 I’ve been sitting back enjoying these videos so I figured I would share them here at PWR. Joe Gagne has taken to Youtube and is doing great (and hilarious) reviews of all the old classic wrestling games many of us grew up with.  From the arcade classics to some of the terrible Nintendo titles, this is a great series to relive all the magic from that era.

These videos bring back so many memories if you grew up playing each game and seeing how most of them improved over time.  The first wrestling game I remember playing at home was “Title Match” for the Atari 2600.  It was terrible…and made my next wrestling game (WrestleMania for NES) ALMOST seem good.  Looking back now, almost all of the first few games were on different levels of terrible.  As time went on there was an emotional roller coaster for wrestling game fans since the arcades had awesome games like “WWF Superstars” and “Wrestlefest,” but the home consoles just couldn’t capture the fun of the arcades until years later.

The late 90’s/early 2000s were a glory period for wrestling games, and we’re looking forward to Joe Gagne reviewing those games as well.  Check out the full series on Youtube where you can view the latest video, which is a review of King of the Ring for NES (quite possibly the worst wrestling game ever, seriously, it went FAR backward instead of forward.)  Below we will feature the review of one of the most fun wrestling games ever and one that was way ahead of its time, WWF WrestleFest: