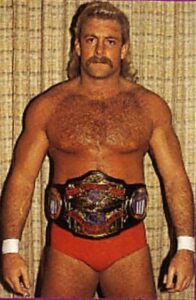 Terrence Wayne “Terry” Allen was born June 19, 1959, in Tidewater, Virginia. Terry attended high school at Norfolk Collegiate School in Norfolk, Virginia where he was a member of the varsity wrestling team. He won the state championship in the 167-pound division, after high school, he attended Old Dominion University but didn’t graduate.

While in Mid-South Wrestling Terry would get a big assist from one of the true legends of pro wrestling as Andre the Giant would suggest that he change his name. Andre thought that Terry resembled Tom Selleck’s “Magnum P.I.” character, so he told him to use the Magnum and to put his initials in place of the “P.I.”. Terry would follow the advice of the pro wrestling legend and Magnum T.A. was born. On May 13, 1984, Magnum T.A. defeated Mr. Wrestling II for the North American Heavyweight Championship, a title he would hold 5 times while in Mid-South Wrestling.

In late 1984, Magnum would sign with Jim Crockett promotions, shortly thereafter he would begin feuding with Wahoo McDaniel. Their feud would climax on March 23, 1985, when Magnum would defeat him for the NWA United States Heavyweight Championship. A few months later Magnum would begin feuding with the Four Horsemen, on September 28, 1985, Magnum would lose a near 30-minute match to the Four Horsemen’s leader, Ric Flair. This match would earn Magnum a tremendous amount of respect and prove him to be a serious contender for the NWA World Heavyweight Championship. Apparently, the Four Horsemen realized what a threat Magnum T.A. was to Ric Flair’s World Title, as they would mount an assault and come after him.

The Horseman that would carry out that assault would be Tully Blanchard, Tully would strike a big blow as he would beat Magnum for the NWA United States Heavyweight Title. But this was only the beginning of this war, a war that would culminate on November 28, 1985, at Starrcade inside the confines of a steel cage. Jim Crockett Promotions and the NWA knew that this war had to end and the only way to end it would be with a surrender. So this final battle between Magnum T.A. and Tully Blanchard would be an “I Quit Match” for the NWA United States Heavyweight Championship. This match would steal the show at “Starrcade ’85” as it was one of the most intense, hard-fought, bloody battles that had ever been witnessed in the history of professional wrestling.

Each wrestler tried numerous times to get his opponent to say “I Quit” but neither man would give up. Both men used multiple weapons trying to get the advantage and it would be one of these weapons that would make the difference. Magnum would find a screwdriver outside the ring, he would begin to use it as he would dig into Tully’s head with the screwdriver. Tully couldn’t withstand the punishment and he would scream the words “I Quit!!!”. Magnum T.A. would leave the ring that night with two very important things, the NWA United States Heavyweight Championship and the revenge that he sought against the Tully Blanchard and the Four Horsemen.

In April of 1986, Magnum began feuding with Ivan Koloff, who had started saying that his nephew Nikita Koloff was going to beat Magnum for the NWA United States Heavyweight Championship. Jim Crockett, Jr would set up a press conference where Magnum and Nikita would sign the contract for their match. Magnum would bring his brother Marion to the contract signing, while Nikita had his uncle Ivan Koloff with him. Nikita would insult Magnum and Marion’s mother, a fight would then break out. Then, NWA president Bob Geigel would reprimand Magnum for behavior unbecoming of a champion, Magnum’s response would be “Reprimand this!” and then he would clothesline the NWA president.

Bob Geigel would then strip Magnum of the NWA United States Heavyweight Championship, but Magnum would be put in a best of 7 series of matches against Nikita Koloff to determine a new champion. Nikita would win the first three matches, but then Magnum would come back and when the next three matches. In the seventh and final match, Nikita would defeat Magnum with help from Ivan Koloff and Krusher Khruschev to become the new NWA United States Heavyweight Champion. It looked as if there was a rematch coming but unfortunately, tragedy would prevent that from happening.

On October 14, 1986, Magnum T.A. was driving his Porsche in the rain when he lost control and crashed only a couple of miles from his home in Charlotte, North Carolina. The injuries he suffered from the crash would end his wrestling career, as his C-4 and C-5 vertebrae would explode. He was paralyzed and doctors told him that he would never walk again, but Magnum trained hard and would regain the use of his legs. Although his in-ring career was over he would continue to work for Jim Crockett Promotions, he worked as an announcer and also as Dusty Rhodes’ manager. He would also work for WCW after they purchased Jim Crockett Promotions, he would do his last work for WCW in 1993.

Magnum T.A. Continues to live in Charlotte, North Carolina with his wife Courtney Shattuck-Blanchard, she is the ex-wife of Magnum’s long-time rival Tully Blanchard. Magnum and Courtney have two children, twins, Lucy and Tucker who they had in 2007. Magnum runs a community hedge fund and a communication towers business, Magnum’s father started the Communications tower business but after his death in 2008 Magnum took over running the family business. So Magnum T.A. Continues to be a success, years ago it was in the ring, now it’s outside the ring in business and in his personal life. Magnum T.A. Has just proven himself to be a champion inside the ring and out.