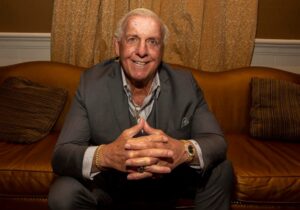 The announcement that Ric Flair would have one final match this July in Nasvhille was met with mixed reactions and opinions, but one thing is official – there is major interest when it comes to ticket sales for this event.

In the video below, David Crocket fills Flair in on the huge level of interest in his last match and just how quickly the event sold out. It’s come to the point that the event is being moved to the Nashville Municipal Auditorium which holds 9,000 – and it’s the same building Flair defeated Ricky Steamboat in for the NWA Title in 1989.

While there’s been concern about Flair’s health going into the match, Conrad Thompson has assured fans that Flair will be taken care of and has hinted that we will still be seeing a multi-man match of sorts. The other interesting part is that the rest of the card hasn’t even been announced, but the entire event is being promoted as bringing back the old Jim Crocket Promotions vibe.

One thing is for sure, Ric Flair can still draw a crowd, and this definitely feels like there is a place and demand for a high-level old-school wrestling promotion in today’s mix. With that said, tickets are once again available for Ric Flair’s last match,  now taking place at the Nashville Municipal Auditorium on July 31st. Tickets available at Starrcast.com