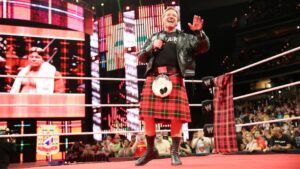 The wrestling world remains in a state of shock after the passing of the legendary “Rowdy” Roddy Piper last week, but at the same time, many celebrations of the Hot Rod’s life and the many memories he gave us are being shared.  Today we have what has already become a historic piece of footage as Maryland Championship Wrestling has released video of the final edition of “Piper’s Pit,” filmed just 13 days prior to Piper’s death.

In a very classy move, MCW has released the entire 22-minute segment that little did anyone know would become the final edition of the iconic “Piper’s Pit” interview segment.  The guest on the Pit is former WWE writer Kevin Eck, and Roddy stays true to form in shooting from the hip on writers in wrestling as a whole and on one particular Piper’s Pit segment from RAW a couple of years back.  The real bonus here is that Piper always had free reign on the mic and discussed numerous moments from throughout his career and was just as sharp as ever with his classic 1 liners.

The respect shown from the MCW crowd seemed to genuinely touch Roddy, and the final shot of him bidding farewell to the crowd is heart-wrenching now given the circumstances.  Huge thanks are in order to Maryland Championship Wrestling for sharing this video as they could have easily chosen to sell it for profit; it will be one of the final Roddy Piper memories we have and the finale of the greatest wrestling interview segment of all time, Piper’s Pit: