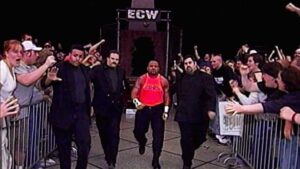 Yes, we’re continuing our celebration of ECW history this week and April 13 is quite a memorable date. Not only was this the date of their inaugural PPV in 1997, but also one of those most unique situations in all of pro wrestling history in the year 2000.

The events that led up to the April 13, 2000, ECW house show in Indianapolis, Indiana hit the mainstream the previous Monday when ECW World Champion Mike Awesome showed up on Nitro and attacked Kevin Nash. Awesome hadn’t shown up the previous weekend for his ECW bookings, citing travel issues.

The legalities of Awesome’s jump to WCW were immediately in question, after all, wasn’t the ECW champion under contract? This was at a time when ECW was beginning to struggle and not everyone was locked into a contract, and apparently, the bigger legal issue was Awesome having possession of the ECW Championship belt, a fact that Paul Heyman made sure to block from being shown on WCW TV.

As news circulated that Awesome would be appearing on WCW Nitro on April 10, 2000, the deals started being made that would ensure Awesome would not show the belt, would be referred to as the ECW Champion, his next title defense would be promoted on commentary, and would not speak on the mic. Things didn’t happen exactly that way, but needless to say, Awesome was part of WCW:

The Internet exploded over Awesome’s jump, but there were even more questions. What would happen to the ECW Championship? Usually, in a situation like this, the belt would be held up and a new champion would be crowned fairly simply. This story, however, was just getting started. As wrestling fans scrambled for more information, ECW kept promoting Mike Awesome’s next title defense which would be just four days after his Nitro debut. But how? The ECW locker room would allow Awesome to appear on the show after his no-show and jump to WCW without notice? Who would he defend the title against? And how was it that Mike Awesome was working for two companies?

Somehow in all the legalities (which were viable or not) and agreements, Awesome did appear in Indiana (accompanied by WCW head of security Doug Dellinger) and was instructed to wait outside in a car until his match. When main event time rolled around, Awesome entered the building and came through the crowd, directly to the ring. What happened next was a moment that will probably never be replicated.

A familiar heartbeat followed by theme music hit, the crowd erupted, and Tazz made his way down the aisle. Yes Tazz, WWF’s Tazz, not ECW’s Taz who had left the company months earlier. This was emphasized in every way – there was no “War Machine” theme song that Taz was known for in ECW, but his WWF theme song he debuted with at the Royal Rumble that year. There was no singlet, but an official WWF Tazz shirt, this was a message that a WWF wrestler was showing up for this match.

I remember personally sitting on the Internet just waiting to see what the outcome would be of this situation (no live streams back in the day of course.) None of this had leaked, there were no chants for the surprise guy like you see on TV these days, this was a genuine reaction the likes of which are rarely seen today. I remember after reading the results, I knew I had to see video as soon as possible.

Somehow Paul Heyman had convinced Vince McMahon to let one of his guys come to ECW and get a win over a guy who had just debuted on Nitro and appeared to be getting a big push against Kevin Nash. We can never say Vince wasn’t down for a good slap in the face to WCW.

The timeline for all this really is wild to think about, realizing as I researched this that all of the events took place over a less than 2 week period. Maybe as an odd historic bonus to all this, we actually got a WWF World Champion vs. ECW World Champion match just a week later on Smackdown as Tazz took on Triple H. This type of thing is absolutely mind-blowing especially for fans at the time, although WWE treated all of it in a passing fashion on their TV:

Definitely one of the wildest two-week periods during the Attitude Era/Monday Night Wars. Sadly it wasn’t long before both WCW and ECW were out of business, but when three major companies were in existence, it made for situations like this that made it an absolute blast to be a wrestling fan.