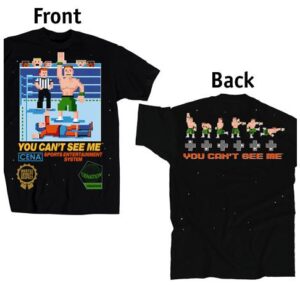 It seems John Cena and WWE have hit the merchandise jackpot with his new NES Pro Wrestling inspired shirt, which is basically the same as the box art for the game with an 8-bit Cena replacing the original wrestlers.

My first thought seeing this was “Wow, that game brings back memories, cool to see it getting recognized!” But then, the more I thought about it, it’s still a John Cena shirt, and I could never bring myself to wear a John Cena shirt no matter how cool the concept. The game itself was probably the first wrestling game on a home console and was pretty damn cool back in the day; the characters were diverse and stuck in people’s minds to this day, which I’m sure is the reason everyone is talking about this new shirt.

So after seeing all this talk, my hope is, we will see a shirt produced with the ORIGINAL box art of the game as I would proudly sport such a shirt and represent the classic game, minus the Cena! I can see somewhere like Hot Topic carrying the original shirt, so I guess I hope the Cena shirt sells really well so that SOMEone jumps on the idea to throw an original Pro Wrestling shirt out there so us non-Cena supporters can represent the original. They could even throw a phrase on the back like “Keeping it old school” or “Accept no imitations.”

Now I’d gladly pay 25 bucks for such a shirt, but I, like many of you males over 12 out there, cannot bring myself to walk around in public or even in my own house with anything pro-Cena on it. So I’m calling the movement now, we demand NES Pro Wrestling Shirts!

And for you die-hard Cena fans, you can get his version of the shirt at John Cena’s gear at WWE Shop.