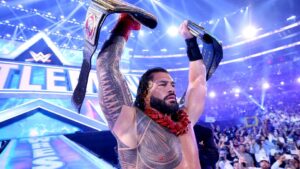 The whirlwind of WrestleMania 38 weekend is in the books, and while night 2 may have been slightly under the level of the night before, it still produced some highly memorable moments. Here’s a quick rundown of the results as well as a few thoughts:

The show kicked off with Triple H coming out to a huge reaction. He welcomed everyone to the show and left his boots in the ring, symbolically retiring after announcing his retirement last week.

Bobby Lashley defeated Omos – Pretty much the clash of the titans you’d expect here. Lashley hands Omos his first pinfall loss after an awkward-looking spear from behind.

Johnny Knoxville defeated Sami Zayn – Lots of talk about this one following the show. If you’re OK with lots of comedy or just a fan of Jackass, you probably enjoyed this one. Wrestling purists, not so much. Lots of interference from Jackass stars like Party Boy and Wee Man. Knoxville gets the win after Zayne is stuck in a giant mouse trap (you read that right.)

Sasha Banks & Naomi defeated Rhea Ripley & Liv Morgan, Carmella & Queen Zelina, and Shayna Baszler & Natalya to win the WWE Women’s Tag Team Championship: Finally, the women get to shine on this night, and this was a good match for what it was given all the chaos going in with so many participants. Banks and Naomi take the victory and the titles making for a feel-good moment.

Edge defeated AJ Styles – Odd moment here to kick things off as AJ Styles is bleeding on his way to the ring. Turns out he had a mishap with the WrestleMania stage while coming out. This match was good as expected but didn’t have anything overly special about it, which I personally didn’t expect it to. Damien Priest shows up ringside, distracts Styles, and Edge gets the win. Priest is now aligned with Edge, and it felt like all of this could have happened on any PPV.

Sheamus & Ridge Holland defeated Kofi Kingston & Xavier Woods – Woods and Kingston wear Big E tribute gear, only to end up losing the match. Felt like this could have been on a SmackDown episode. This was the match that got shuffled over from the previous night after being cut.

Pat McAfee defeated Austin Theory – THIS is where things really got interesting. This story had been building for weeks if not months counting Theory’s road to becoming Mr. McMahon’s protege. Vince comes out first to announce Theory. McAfee is a crowd favorite and has “IT” when it comes to pro wrestling. McAfee scores the victory over Theory, which leads to…

Vince McMahon defeated Pat McAfee – You read that right, Vince had to show his protege how it was done, so he hopped in the ring, removed his shirt to show off his still-jacked physique, and called for a match with McAfee. After much interference of Theory, McMahon punts a Dallas Cowboys football between McAfee’s leg and scores the win. Which led to…

The glass breaks and “Stone Cold” Steve Austin is back for more after his victory on night 1. Austin stuns Theory, drinks a beer with McMahon, and then, well, tries to stun Vince too. Vince was stumbling all over and never got his balance. Austin celebrates with McAfee who is getting all the rub here, but then gets a stunner as well. Austin stands tall again and the Texas crowd loves it.

Roman Reigns defeated Brock Lesnar to Unify the WWE and Universal Titles – Another good match between these two as expected. Maybe what wasn’t expected was Roman pinning Brock after a spear – proving not every match needs 20 near falls. It was out of nowhere but solidified Reigns once again as the top guy in WWE right now.

Now we head into the biggest RAW of the year with Reigns as champion, Cody Rhodes on deck, and hopefully, some surprises that will shake things up and ride the wave of interest created by WrestleMania 38.