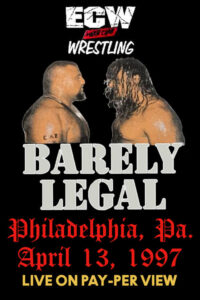 Today marks the 25th anniversary of ECW reaching the next level in popularity and becoming a nationally known entity – airing a PPV. “Barely Legal” was a fitting name for the show because it was true; numerous times had Paul Heyman almost got ECW on PPV, but it was a different market back then and not just any type of content could be aired freely as it can today.

ECW was a different animal than any other televised wrestling at the time. There was violence, foul language, and barely clothed women, how could PPV carriers allow this? Even myself as a teenager who was lucky enough to have access to ECW via satellite dish wondered how this promotion could air live, after all, what I saw on their weekly TV was edited so the stuff that went TOO far was only available on home video. It took a long of time and negotiation, but somehow Heyman pulled it off an on April 13, 1997, ECW went live from the ECW Arena in Philadelphia.

Even before the PPV was wet in stone, the build had begun over a year prior with Sabu vs. Taz having an amazing build over that time that didn’t involve the two getting physical at all – a true testament to Paul E’s booking (especially since Sabu never spoke back then.) The match wasn’t even for a title, but the disdain these two seemed to have for each other was at a level that made you question how much of it was real, and still kind of does to this day.

The other main event on the show came in two parts – a three-way dance featuring Stevie Richards vs. The Sandman vs. Terry Funk, with the winner challenging Raven for the ECW World Title immediately after. If you’ve seen the classic documentary Beyond the Mat, this match was featured both in-ring and behind the scenes. As seen in the movie, ECW was cutting it close on time but somehow accomplished their mission of showing Terry Funk’s ECW Championship victory before going off the air (Tommy Dreamer has also noted over the years that a generator blew right at this moment, another factor of Funk’s moment barely making the show.)

Terry Funk was basically the one veteran Paul Heyman wanted to build the company on, and ending the PPV with the 53-year-old Funk having this shining moment just felt right for the company. The complete results of the show looked like this:

ECW Barely Legal was a historic event for many reasons. The company filled a void for wrestling fans that wanted a more adult product, and now they had a means of seeing it live. Below is a review from Wrestling with Wregret’s Youtube channel which runs down the entire card and features footage from the event: