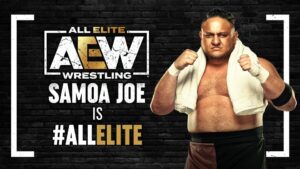 You read that headline right even though it may be a bit confusing if you haven’t kept up with all of Tony Khan’s business moves lately. Amid all of the numerous wrestling events going on around WrestleMania weekend, Ring of Honor ran their first show since Tony Khan purchased the company, and the AEW presence was felt in a major way already.

Earlier tonight at ROH’s “Supercard of Honor” event, the biggest news of the night was the return of Samoa Joe to the company he played a major role in building. It’s become clear that ROH will now feature a number of AEW-signed talent since they are now under the same umbrella, but did the return of one of the biggest free agents in wrestling following his WWE release mean Joe would be exclusive to Ring of Honor? Not at all.

Shortly after Samoa Joe blew the roof off with his return in Dallas which closed the show, Tony Khan was quick to announce that Joe has signed with AEW and will appear on Dynamite this Wednesday. What a pro wrestling world we live in where two major companies are now owned by the same person, but actually operate as separate entities, a wish we recently brought up in our post looking back at WWE buying WCW.

While underutilized or upcoming talent can now find a home in ROH, AEW has the ability to use a major name like Samoa Joe to enhance both shows. The possibilities out the gate of Joe vs. guys he’s had a history with like Punk, Danielson, Cole, etc. that could happen in either promotion, added to all the new talent he’s yet to face has to be a big win for Tony Khan.

Things should play out much further on Wednesday when we learn more about where Samoa Joe will fall in AEW, and maybe even more about the presence Ring of Honor may have on AEW TV. Check out Samoa Joe’s ROH return below: