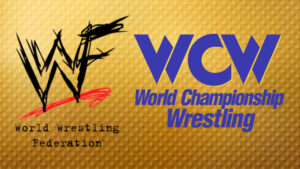 Just reading over the pro wrestling headlines today and realized it’s been 21 years since one of the biggest pro wrestling stories of our time took place. I can remember waking up and reading the headline that day – “The WWF has Purchased WCW” – wait, what?!

It was a crazy time to be a wrestling fan; the WWF had taken over WCW in popularity by far, WCW’s attempts at new regimes like bringing in Vince Russo and Ed Ferrara had failed, but it had already been announced that Eric Bischoff was buying WCW. It was all official, it had already been announced on TV, Bischoff was buying WCW and the company would be relaunched. Only somewhere along the way, Turner Broadcasting decided it would no longer have WCW programming on its networks, so Bischoff didn’t really have a company without a TV deal.

Vince McMahon swooped in, bought WCW including its entire video library for just $4.2 million, and the “Monday Night War” was over. It all happened so fast, but it felt like thoughts immediately shifted to actually seeing WCW vs. WWF on TV since both companies were under the same umbrella. Austin vs. Goldberg? Sting vs. The Undertaker? With WrestleMania X-7 only days from this announcement, when would the dream matches begin?!

Well, we all know how that turned out, and WWF purchasing WCW and the way the company was handled afterward was a complete failure creatively. So many possibilities, so many chances for WCW to continue and thrive even after being purchased by the WWF, but it wasn’t to be. On March 23, 2001, the excitement was in the air at least on that day. Days later, Shane McMahon showed up on Niro and it seemed like the new era was in full swing. By WrestleMania, it was already apparent that things probably weren’t going where we had hoped. Within just a few months, the WCW brand was no longer a part of WWE programming. Only a few main event WCW stars came over in the beginning, with others like Diamond Dallas Page, Rey Mysterio, Goldberg, the nWo, and even Eric Bischoff himself joining the company over time in the following two years, but with no real connection to WCW.

A crazy end for a company that just a couple of years earlier was a dominant force that had their opponent on the brink of bankruptcy. Here’s a clip of Shane McMahon, Bruce Prichard, and John Laurinaitis talking about the shocking sale of WCW: