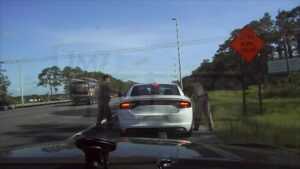 The reports of Jeff Hardy’s DUI arrest were met with universal worry about the AEW star. Today that concern is probably amplified even further as TMZ has released the dashcam footage from the arrest.

For anyone that thought maybe Jeff just had a “little” too much or maybe it wasn’t as bad as it sounded, those thoughts have been dispelled as the below video shows how dangerous it was for Hardy to be on the road at all. The video shows officers first drawing guns on Hardy, then him being unable to answer questions correctly nor even complete the field sobriety test.

After the release of this video, there really isn’t any “out” on this one for Jeff Hardy. He likely won’t appear on AEW TV again without entering and completing some sort of treatment, nor should he. Jeff’s wrestling career (and life in general) is once again at a crossroads, as it’s been a number of times before. Matt Hardy also commented on the arrest, and said just about all that can be said about the situation:

It was disheartening to hear the news about my brother yesterday. Recovery isn’t a linear process & I’ll continue doing whatever I can to help my brother be healthy. Being healthy & well is the most important thing for Jeff, his wife, his children & our family at this time.