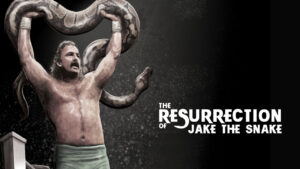 Just wanted to give everyone a heads up and let you know that the awesome documentary “The Resurrection of Jake the Snake” is now available to watch online for free.

The much-celebrated film is a raw look at the state pro wrestling legend Jake “The Snake” Roberts was in from pretty much the late 90s up until the point Diamond Dallas Page decided to take action and help him. At the time the film was being made, the thought of Jake being back working steadily for a major wrestling promotion was non-existent. His drug and alcohol abuse has been well documented for years, but seeing Jake and Page’s interactions and approach to Jake’s problems was very raw and real.

Another major (and unexpected) part of the documentary was when DDP and Jake got Scott Hall to move in when he was at one of his lowest points. In many ways, we got to see the resurrection of Hall as well. To watch this journey and how both Jake and Hall went from their lowest points to back on top of the world was truly inspiring, especially now since Scott’s passing.

Check out “The Resurrection of Jake the Snake” below thanks to Indie Rights Movies For Free: