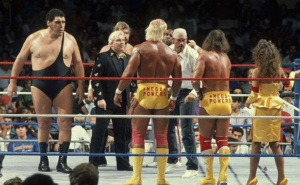 It’s hard to believe that the annual SummerSlam event has now been around for 34 years; what better time to look back at the event that started it all? A WWF PPV being held in the summer really was a huge deal for wrestling fans at the time; keep in mind that WrestleMania was the only yearly PPV at the time and the Survivor Series had just begun months earlier. A third yearly PPV was welcome, and SummerSlam was born in August 1988.

Even though WrestleMania 4 was held five months earlier, SummerSlam’s main event was a direct continuation of WrestleMania’s main storyline as WWF Champion Randy “Macho Man” Savage teamed up with Hulk Hogan (The Mega Powers) to take on Ted Dibiase and Andre the Giant (The Mega Bucks.) For any wrestling fans today that complain about the lack of long-term storytelling, the build to this match, as well as its aftermath, are perfect examples of following a pro wrestling story for months or even years.

We previously wrote about the formation of the Mega Powers, but it’s amazing to think that while the formation occurred in October of 1987, their match at SummerSlam in August of 88 was their first televised tag team match. Back in those days, you didn’t have main event guys wrestling on TV every week. The chance to see Hogan or even Andre wrestle on TV was a rare occurrence back then.

This match came together following Randy Savage’s tournament win at WrestleMania 4 where he won the WWF Championship, albeit with Hogan’s help. The Dibiase and Savage feud was a natural following their controversial tournament final, and Hogan and Andre had been feuding since WrestleMania 3 so SummerSlam was the culmination of those two feuds. Add the fact that Jesse “The Body” Ventura would be the special referee threw another element of “what’s going to happen here?” into the match.

During the lead-up to the match, it was hinted that Dibiase would pay off Ventura, who was the “bad guy” commentator at the time of course. Hogan and Savage countered by stating they had a “secret weapon” in their arsenal. Well, Ventura called the match mostly down the middle, while the Mega Powers had Elizabeth take her skirt off on the ring apron, paralyzing the entire heel side in sexual fantasy land – a very risque moment for 1988.

Hogan and Savage scored the win after Ventura, either reluctantly or with Macho Man’s aid, made the three count. It was never entirely clear whether Ventura chose to do the right thing or just fell victim to Savage helping him along. Ventura’s role was never really mentioned again after the match.

The other major piece to everything looking back was that this was the very first tiny seed being planted that led to the Hogan/Savage breakup. After the match, Hogan hugs and picks up Elizabeth, to which Savage ever-so-slightly reacts – a moment that would be built upon all the way until WrestleMania 5.

Here is the full Mega Powers vs. Mega Bucks match from SummerSlam 88 which kicked off SummerSlam becoming a yearly tradition: