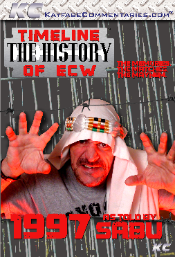 I had the chance to watch my first wrestling “shoot interview” around 1996, and at the time it was so amazing to see these wrestling stars openly discussing the inner workings of the business and telling stories of experiences a fan would normally not have access to.  After a few years, the style of shoot interview became pretty formulaic and there were some glaring problems that annoyed viewers.  Asking the same questions, moving to the next topic before the wrestler was done with the current one, skipping some topics completely, and the interviewer being afraid of really digging for answers to the uncomfortable questions were all the norm.  Today I can gladly report that “Kayfabe Commentaries” is changing a lot of that.

Kayfabe Commentaries has taken the art of the shoot interview and broken it down into a series of features that allow viewers to really get the full story.  In “Timeline: The History of ECW – 1997 as Told by Sabu” we get the entire year of 1997 in ECW, event by event (with some background info. popping up on screen in between questions to set the stage for what was happening on a given date.)  Every PPV, house show, memorable event, untold story, it’s all here with Sabu describing his side of each story.

What makes this feature even more interesting is that as many of you know, during this period and for most of his career, Sabu has very rarely spoken.  He never did interviews or promos, and only the last few years has given a few interviews.  But on this DVD Sabu really goes deep into his feelings on ECW and the events in 1997 which included his memorable “Born to be Wired” match with Terry Funk, his Barely Legal match with Taz, and ECW’s 1997 invasion of WWE, and much more.

Also included are Sabu’s feelings on just about everyone he worked with in 1997 including Paul Heyman, Tod Gordon, The Dudley’s, Rob Van Dam, Vince McMahon, and everyone in between.  Host Sean Oliver isn’t afraid to push Sabu to dish the dirt on any topic including drug use and other stories that Sabu is almost hesitant to tell.  It’s great to see an interviewer on screen interacting with the guest which gives the vibe that we’re getting to watch an interesting conversation rather than seeing a wrestler alone on camera looking like he’s getting the third degree.

This is the first time I have seen Sabu be so open on camera, and there are many stories I had never heard.  At one point in the interview, I was in total shock to see a hardcore icon like Sabu break into tears when discussing what he did to help ECW and the treatment he received regardless.  If you were a huge follower of ECW in 1997, this is an awesome perspective from a main eventer in that period, and someone who is more involved than we ever knew…until now.

This is only our first review on a Kayfabe Commentaries DVD but we hope to review all their future releases, as the “Timeline” series is just one of their many features.  There is also the “YouShoot” series which allows fans to actually be the interviewers by sending in questions and having them asked – and trust us the questions asked aren’t censored and there are some eyebrow-raising questions for sure.  Head over to Kayfabe Memories to order your copy of “Timeline: The History of ECW – 1997 as Told by Sabu.