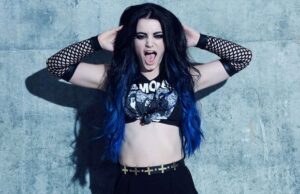 It’s been a crazy year for WWE Superstar Paige, and depending on whose opinion you listen to, that could be a good or a bad thing.  Paige came in to WWE and was an immediate star as she defeated Divas Champion AJ Lee for the title on her first night with the main roster.  Prior to that, she had a highly successful run in NXT and even before starting there, she was already a veteran in the wrestling business being she started in her teenage years.

Paige was really the first female that initiated the current “Divas Revolution” that has seen stars like Sasha Banks, Becky Lynch, Charlotte Flair, and others rise to prominence, which makes it a shame that she’s been out of the picture in WWE for the past few months for various reasons.

It seemed like Paige’s star was set to keep on rising as she’s been a mainstay in the women’s division and then became an even bigger star when she joined the Total Divas cast; then it seemed like as her real-life relationship with “Alberto Del Rio” aka “Alberto El Patron” came to light, things seemed to start going south for Paige in WWE.  That’s not to say the relationship is the reason, but her two suspensions and neck surgery all happened during that time frame and are all reasons she’s been off WWE TV.

Now another incident has taken place that could be the final straw for the WWE/Paige relationship as explicit personal photos and videos of Paige have leaked online.  Granted, this was likely not Paige’s fault as these were never meant to be seen publicly, but they obviously don’t do anything positive for WWE’s image.

The content in question was apparently taken from a few years back, well before Paige’s relationship with Alberto, but during a time she may have apparently been in a relationship with former WWE star Brad Maddox.  The videos and photos were obviously meant to remain private, but it’s not clear how the content was made public.

We won’t get into details here as the content is quite explicit and we try to keep it clean, but for those of you that want the details you can read this report: WWE star Paige sex video and photos leak – just be warned that this content is highly NSFW.

Will this be the end of Paige in WWE? It seems likely due to all her other recent problems with the company.  If she is released, it’s not like she won’t find work since she is a major talent that could excel anywhere else.  Of course, Alberto El Patron just became a main eventer in Impact Wrestling so seeing Paige popup there (under a different name of course) seems likely.  It’s also possible that WWE doesn’t want to let her go due to her star power and lets this blow over before she’s physically able to make her return.