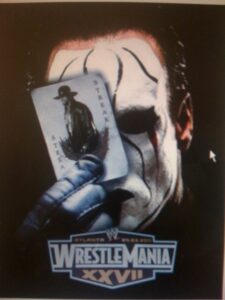 When the now-infamous “2/21/11” promo aired this past Monday, I simply thought “looks like The Undertaker is coming back for the Road to WrestleMania.”  A few hours later, I was getting all kinds of emails and reading all over the Internet about the promo meaning Sting was coming to WWE.  I pretty much laughed it off at first, as I just couldn’t really believe WWE would do it.  Up until this past Sunday’s Royal Rumble which saw the awesome fan reaction to the returns of Booker T, and Kevin Nash as “Diesel,” WWE has been all about young talent and doing away with most of the old.  Booker and Diesel blew the roof off the place and got the biggest reactions of the night by far, which should tell WWE that fans do want some old-school stars in the mix.

The idea of Sting coming to WWE has sparked much conversation about a WrestleMania dream match featuring Sting vs. The Undertaker.  This match would be the only one on the card that has that WrestleMania “magic” feeling to it.  Honestly, does Cena vs. Miz, Del Rio vs. Edge, Orton vs. Punk, or Undertaker vs. Barrett feel special at all?  All good matches, of course, PPV worthy even, but no WrestleMania magic there.  Sting vs. Undertaker would give us the battle of two icons from different worlds that would have fans going absolutely insane just a\t the visual of ‘Taker and Sting facing off in the middle of the ring on the grandest stage of all.

If we don’t get the dream match, we’re looking at Wade Barrett being Undertaker’s opponent, and does ANYone believe Barret would break the streak?  It would be a simple match, Undertaker would win, the streak continues……..boring.  Granted if Sting was Undertaker’s opponent, the streak would no doubt still continue, but we would witness an epic match that would create the magic, and there are very few possible matches still out there in the wrestling world that could give us that.

The buzz on this has been huge, and Vince McMahon has hopefully taken notice and at least talked to Sting.  Take note that while local ads for the 2/21/11 RAW have advertised “Undertakers Return,” there has also been no one denying that Sting is coming in either, so take that for what it’s worth.  The intrigue is there, the buzz is there, and the pic above is one of the awesome fan-made creations that shows the type of interest this potential match has drawn.  The same type of hype was created for the possible Undertaker vs. Brock Lesnar match that we now know isn’t happening, but WWE can definitely still give us something special, even more so maybe if for the first time in his career they bring Sting to WWE. The message to WWE is simple, the fans want WrestleMania magic, so do whatever you can to make this happen!

What are your thoughts and hopes on the 2/21/11 promo?  Share in the comments below.