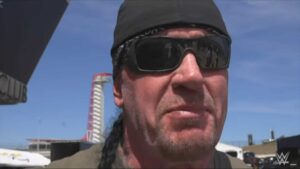 The hype for WrestleMania is really picking up as we are less than a week from kicking off the festivities, and undoubtedly the return of “Stone Cold” Steve Austin is one of the most talked-about topics.

One person we didn’t really expect to chime in on the situation was the one and only Undertaker who will be inducted into the WWE Hall of Fame this Friday night in Dallas. “The Deadman” is undoubtedly a huge part of the promotion for WrestleMania 38, and now he’s shared his thoughts on Kevin Owens calling out Austin after 19 years of the “Texas Rattlesnake” being away from the ring. The Undertaker’s comments only fuel speculation that Austin isn’t coming to WrestleMania just for an interview or just to deliver a stunner, but definitely for a fight that will likely be treated as a match of sorts.

There is a rumor circulating that Austin vs. Owens will close WrestleMania night 1, and we can’t argue with that since Austin’s return to the ring will likely be the biggest and most memorable moment of the entire weekend. Check out the Undertaker’s thoughts on Owens and Austin colliding at WrestleMania: