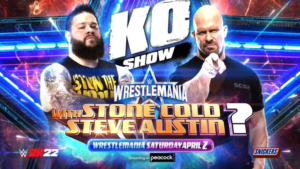 For weeks now we’ve heard the rumblings that “Stone Cold” Steve Austin could return to the ring for a match at WrestleMania with Kevin Owens. When Owens began trashing the state of Texas, there seemed to be fuel to the fire, but last night on Monday Night RAW, things took a bit of a turn when Owens actually invited Austin to be on “The Kevin Owens Show” at WrestleMania 38 in Dallas.

So it looked like the thought of a monumental in-ring return by Austin for one last match had turned into nearly the same thing we’ve seen with Stone Cold many times before – Austin arrives, stuns someone, leaves. Even back at WrestleMania 21, Austin was the guest on Piper’s Pit which at the time was quite a novel idea. Here we are 17 years later, and Austin showing up at a special event to deliver a promo and a stunner doesn’t seem all that special.

BUT, this morning, another twist has taken place as Steve Austin has officially accepted Owens’ invitation (no shock there,) but the real shock is that Austin mentions that he’s been retired for 19 years and that Owens has “woke something up inside him” and he’s coming to Dallas to “open one last can of whoop-ass.” “Call it a KO Show, a match, a fight, a brawl, whatever” – Mr. Austin, we want to call this a match with a decisive winner regardless of the rules.

So, Austin vs. Owens is back on the table? Why didn’t Owens just challenge Austin to some sort of fight and leave it open? We know the talk show formula, we know it would end in physicality, but advertising this as Austin’s first match in 19 years (which they are basically doing) has big money all over it, so not sure why that wasn’t the approach on TV.

No matter how you view it, Austin’s acceptance of the invitation and the accompanying promo is straight-up old-school WrestleMania magic, and it has drastically improved the outlook of this showdown in Dallas, where Austin started his career. Check out the awesome video below of “Stone Cold” Steve Austin officially confirming he will be at WrestleMania 38: