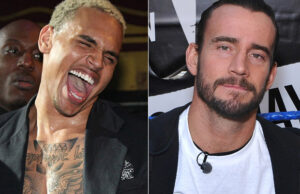 Yesterday we reported on the heated exchanged between CM Punk and singer Chris Brown on Twitter, and just a few minutes ago things got even more intense as Punk released a video response to Brown.  Punk hadn’t said anything back since Brown responded to Punk, but this video gets the point across and then some.

In the video, Punk challenges Brown to a fight (even though he realizes the challenge won’t be accepted,) but makes every valid point there is to make on the woman beater Brown.  It’s a media frenzy over this and would make for an awesome WrestleMania beat down, but we all know Brown will just whine and cry about it and try to blow it off, just like he’s doing when it comes to beating women.  It’s great to see CM Punk making this statement in the wake of Brown getting publicity for releasing music with the woman he beat up.  Brown has been called out for his actions once again, and we agree with everything said by Punk in the video below: