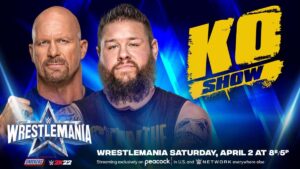 WrestleMania has become an event that becomes bigger by the year, especially now that it spans over two nights. With so much to keep up with, it may become difficult to track what night your favorite matches and segments fall on, so I’ve compiled the card for night 1 of WrestleMania 38 which airs in just a few hours.

The way this card is compiled is a bit interesting – you might think each night of WrestleMania would get a Women’s Title match, but no, both will happen on night 1 as Charlotte Flair battles Ronda Rousey and Bianca Belair takes on Becky Lynch.

It’s now been openly acknowledged that the night 1 “main event” will be the KO Show with Kevin Owens featuring his guest “Stone Cold” Steve Austin. Since it’s been acknowledged that this will close the show, it’s a near guarantee that this will be a match of sorts. Will Austin come out in the black boots and tights for the first time in 19 years? This will undoubtedly be a highlight of the entire weekend.

Since Steve Austin’s return is quite the attraction, you may think the other big attraction in finding out Seth Rollins’ opponent may be saved for Sunday, but that too will happen on night 1. The rumors abound, the teases from Rollins and even The Undertaker during his Hall of Fame speech – we feel like we’ll be talking about this one in a major way however things turn out tonight.

The full card for WrestleMania 38 night 1 looks like this:

The Mysterios vs. Logan Paul and The Miz

So there’s what we’re looking at for night 1 of WrestleMania. Will it set the bar for night 2? For some reason, most of my interest lies in night 1 since we have not only the Steve Austin return but the chance for surprises as well as the Women’s Title matches which have performed well at the past couple of WrestleManias. The festivities kick off later tonight on Peacock, we’ll report back here with results and thoughts following the show!