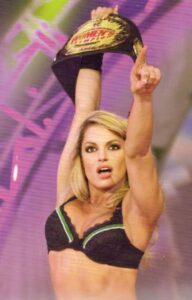 On Sept. 17, 2006, at the WWE pay-per-view, “Unforgiven” Trish Stratus wrestled her final match where she defeated WWE Women’s Champion Lita in a great match that we had become so used to. But none of us knew that in just 5 years the Women’s Division would become a mere shadow of its former self.

The Women’s Division suffered a tremendous loss when Trish Stratus and Lita both retired in 2006. Fortunately, there were some very talented Divas waiting for their opportunity to shine. Mickie James would defeat Lita for the title in Lita’s final match in 2007. Also that same year former “Diva Search” contestant Candice Michelle would defeat Melina for the title. Candice would hold the title for nearly 4 months before she lost it to newcomer Beth Phoenix. Melina would defeat Beth Phoenix at the 2009 Royal Rumble for her third Women’s Championship. The Women’s Division would continue to flourish until 2010 when an absolute debacle would begin.

You have talented Divas on both Raw and Smackdown and all of them are fighting for just one title. Why can’t there be two titles or, like in TNA, one singles title and a tag-team title? With the lack of championship gold to fight for, creative storylines are needed to keep things interesting. However, the WWE looked at it differently as they would remove the storylines altogether. Diva matches would be put together with no storyline and for no apparent reason whatsoever. Whoever was holding the title became irrelevant because the same thing would happen over and over. The champion would hold the title for no more than three months, then there would be a series of about three matches against a new opponent. In the third match, the challenger would win the title; she would then retain the title in a rematch, and then a new challenger would emerge and the exact same scenario would happen again.

So we have gone from a Women’s Division that had talented female wrestlers, great storylines, intense rivalries, and awesome matches to a Diva’s Division where the WWE has released all the great female wrestlers and replaced them with models who have no in-ring ability whatsoever, a nonexistent storyline, no rivalries, and five-minute matches that are just absolutely painful to watch.

In conclusion, I would like to ask the WWE one question, Why?