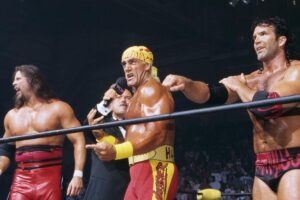 It’s hard to believe it’s been 26 years since the nWo formed and changed the entire wrestling landscape. The way things played out with Scott Hall’s initial arrival, Kevin Nash joining him a week later, and then all the build to finding out who else would join them was surreal as a fan at the time.

This post is pretty much my personal look back at this event as I lived through it and just became a newsletter reader months prior. The newsletter part is key because the rumors were flying about who Scott Hall and Kevin Nash’s “third man” would be. It HAD to be someone else from the WWF right? Who’s contract was coming up? Who was available? These were all questions that were swirling, but no one really knew who it would be.

Hulk Hogan’s name had been on the long list of possibilities, but it was a stretch. For me, Hogan had been the face of wrestling in pop culture since I became a fan in 1986. There was no way the most iconic good guy in wrestling would turn, it was just unimaginable.

As for the other possibilities, Lex Luger and Sting were on the list (both members of the opposing team at Bash at the Beach.) Sting seemed improbably and nonsensical at the time; what connection did he have to Hall and Nash? He was never a “WWF guy,” and turning him just didn’t seem to make sense. In recent years, Eric Bischoff has revealed that Sting actually was the backup plan had things not worked (not King Mabel which had been widely rumored) out the way they did. Imagine how different the entire nWo and the course of pro history would have changed? On the contrary, Lex Luger made a lot of sense as the third man being he had just jumped from the WWF the previous year and had walked the line of being a face or heel since. This option was one I wasn’t hoping for since it just wasn’t much of a surprise. We had seen Luger on both sides of the fence already in WCW, and the big amazement of this whole thing was seeing “WWF guys” like “Diesel” and “Razor Ramon” wrestling on a WCW PPV. When Luger was “injured” in the first few minutes of the match, I was disappointed in how sure I was that he was definitely the third man.

Luger being taken out on a stretcher, making a heroic comeback toward the end of the match, then turning on Sting and Randy Savage was 100% how I saw things playing out. Even as the crowd rose to their feet as someone was making their way down the aisle, I was sure it was Luger. But as luck would have it, it was indeed Hulk Hogan who hadn’t been seen on WCW TV for a couple of months.

Still, things didn’t register until the minute Hogan dropped the leg on Savage. People point to Bobby Heenan’s “but who’s side is he on?” comment, but what else would The Brain say? It fell right in line with his career-long mistrust and feud with Hogan. Seeing Hogan in his traditional red and yellow colors, suddenly giving Hall and Nash the thumbs up, was one of the most surreal things ever seen in wrestling.

Most everyone knows the history, the trash being thrown in the ring as Hogan cut his first heel promo alongside longtime friend “Mean” Gene Okerlund, Hogan reinventing himself as “Hollywood Hogan,” and the aftermath that led to WCW dominating the ratings for a couple of years as the nWo was red-hot.

Below is the full match that started it all as “Diesel” and “Razor Ramon” actually use their real names for the first time on this PPV as they take on Sting, Lex Luger, and Randy Savage at Bash at the Beach 96: