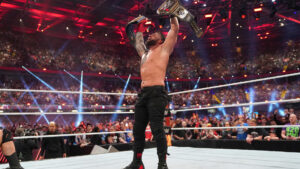 Triple H’s first premium live event under his creative leadership (the build to SummerSlam was mostly still under Vince McMahon) was a big one as over 60,000 fans witnessed Clash at the Castle in Cardiff, Wales.

The show had an electric atmosphere as the crowd was hot for everything, and it didn’t hurt that every match had a reason, feud, or at least some build behind it. The matches had some good variety, and we saw big angles take place that will build toward future events. Below is a rundown of the card and results:

In a pre-show match, The Street Profits and Madcap Moss defeated Theory and The Alpha Academy – A good opener that did its job in warming the crowd up.

Bayley, Dakota Kai, and IYO SKY defeated Bianca Belair, Alexa Bliss, and Asuka – Good reactions for all involved, especially Bayley, who was a former favorite of the UK crowd before her turn to the dark side. There were a few sloppy spots where it seemed like Kai was either out of position or forgot certain spots, which appeared to cause Bayley (the illegal person in the ring) to pick up the win over Belair. It looks like a Bayley vs. Belair match will be coming soon as a result of this match.

Gunther retained the Intercontinental Championship over Sheamus – This match may have very well stolen the show. We knew it’d be hard-hitting, but this was next-level brutality from the get-go. For anyone looking for the feel of a legit fight, this match was it. Gunther gets the win but Sheamus gets a standing ovation from the stadium in the aftermath. Since Sheamus hasn’t been involved in too many meaningful moments in the past few years, this really felt like a sign that things were being done right creatively.

Liv Morgan retained the SmackDown Women’s Championship over Shayna Baszler – This match was built really from scratch, with Baszler having to basically be re-introduced as an MMA badass, and building up how the underdog Champion Morgan would have to find a way to beat her. We reported last week on the excellent video that featured Liv training with Matt Riddle to up her MMA skills and she utilized them in the match to not only survive but to pull off the win against Baszler.

Edge and Rey Mysterio w/Dominik Mysterio defeated The Judgement Day – This one has been building for months and has had a few twists and turns. The crowd treated Edge like the legend he is and couldn’t wait for him to get in the ring. The tension between the Mysterios over Rey teaming with Edge instead of Dominik has been teased, but in a nice bit of a swerve, Dominik actually helped them pick up the win here…before turning on Edge with a swift kick to the balls. As Rey intervened, Dominik hit his father with a clothesline, and suddenly a new heel side of Dominik Mysterio was born. This situation left us with a “Will Dominik join The Judgement Day or was all of this his own doing? Guess we’ll have to tune in to find out.

Seth Rollins defeated Matt Riddle – After the heated feud these two have had, the match came off exactly as it should – a fight. These two came to blows right away and kept that energy throughout the match. This has to be the most serious version of Riddle we’ve seen in WWE, and it’s a welcome change. Rollins picks up the win, which he needed to after losing his entire series with Cody Rhodes, but ultimately it felt like Riddle was elevated even in this losing effort, and it seems like this feud is far from over.

The crowd was absolutely electric here, and Drew’s character felt saved after a couple of years of being the goofy smiling good guy that most main faces are forced to turn into under Vince McMahon’s reign. It didn’t hurt that Drew’s entrance included the return of the beloved “Broken Dreams” theme music from his first WWE run:

The crowd in Cardiff was solidly behind Drew here, but with rumblings of Roman possibly facing The Rock at WrestleMania, keeping the title on him for the time being made sense, especially since there were no plans here for just one of the titles to be on the line or anything.

Of course, there were a lot of twists and turns here even without The Usos or Paul Heyman present. The first was Tyson Fury, who sat ringside for the event, blocking Austin Theory’s attempt to cash in his Money in the Bank briefcase with a knockout blow. The second was the debuting Solo Sikoa (younger brother of The Usos) who prevented McIntyre from getting a three count and aiding his cousin Roman Reigns in victory.

The aftermath of the show seemed a bit unplanned and they just kept cameras rolling as Tyson Fury entered the ring and actually serenaded McIntyre after putting him over for his effort. This definitely did not feel scripted and was more on the side of just letting viewers enjoy the post-event festivities.

Clash at the Castle was a very solid event that had a WrestleMania vibe to it. Things made sense, other things made us wonder what was next, and there didn’t seem to be any matches just thrown out to fill time other than the pre-show match which served its purpose. Seeing longer meaningful matches on PPV while stories and angles mostly fill the TV shows is hopefully the way Triple H will approach things. With this being such a solid show after only a month of Triple H’s leadership, we’re looking forward to seeing how things progress in the coming weeks.