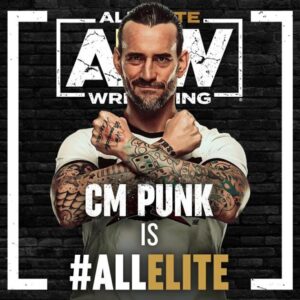 It may have been the worst kept secret in wrestling, but that takes nothing away from the absolute magical moment that was CM Punk making his All Elite Wrestling debut on Rampage. “The First Dance” has been built for weeks with no actual mention of Punk, but in this day and age, it was proven that a unique approach to such a massive signing can still work in unimaginable ways.

Punk kicked off the show on TNT, and upon realizing that the crowd was ravenous with their “CM PUNK!” chants, it was clear that there was no other way to try and have anything else on the show before him. Seeing Punk taking his time, soaking in the Chicago crowd, obviously not worrying about cues, and of course, no script, was truly refreshing and just felt so right.

Punk grabbed the mic and opened up by apologizing to anyone that felt any type of negative way about his decisions over the past few years, likely a reference to his UFC run, but the Chicago crowd was having zero negative feelings toward their hometown hero. Punk also mentioned that leaving ROH in 2005 felt like he left pro wrestling, but now he is back. Punk also mentioned he couldn’t get healthy in any way by staying in the company that made him sick, so yes, shots fired WWE.

Finally Punk announced that not only was he back, but that Darby Allin was his first target, and he would be taking him on at the All Out PPV on September 5th. The camera panning to the ceiling of the United Center to Allin and Sting really was a generational clashing moment, and instantly made Allin seem like an even bigger star. Finally, in a nice nod to one of his legendary WWE moments, Punk announced that everyone in the crowd in Chicago would get free ice cream on their way out.

CM Punk’s AEW debut was so memorable it’s really hard to put into words, so make a point to go back and watch it if you didn’t see it live. Of course, this initial appearance will lead to numerous appearances beginning next week on Dynamite from Milwaukee. This signing really is a game-changer and will likely put AEW on the map as far as being a real threat to become the most popular wrestling company in the country with the numbers to prove it.

**Update – AEW has uploaded Punk’s debut which can be seen below: