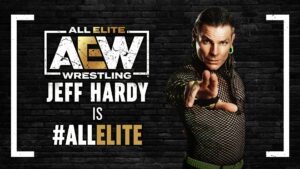 In yet another case of WWE’s loss being AEW’s gain, Jeff Hardy made his electrifying debut on Dynamite last night. Just three months ago, we reported on Jeff Hardy’s WWE release, but as the story has unfolded, it appears that WWE jumped the gun on releasing Hardy and now have to deal with the consequences.

After news broke that Jeff Hardy passed both a breathalyzer and drug test following the incident at a WWE house show that caused his release, the company reportedly offered Jeff a return as well as an induction into their Hall of Fame, but it was too little too late, the buzz about Jeff Hardy signing with AEW had already begun.

On the AEW side of things, Matt Hardy had moved into a managerial role, and as a heel at that, but last night wiped away any thought other than a full-on Hardy Boyz reunion. Hardy was turned on by Private Party as they joined Andrade El Idolo in beating him down, but in a nice twist, it was Sting and Darby Allin who made the initial save as the fans were already chanting “Jeff!” Sure enough, next up the classic Hardy Boyz theme music hit and Jeff Hardy blew the roof off of the arena.

That’s right, the classic Hardy Boyz theme, which is kind of a big deal. Tony Khan actually bought the rights to the song since it wasn’t a WWE creation, so we’re going to get the trademark music that has accompanied the Hardys for over 20 years now for their AEW run.

The hopes for Jeff Hardy’s AEW run are high right now, with the Hardy Boyz getting a (possibly final) run as a team, and of course, Jeff Hardy has proven he can be a main event singles star as well. When Hardy’s returned to WWE in 2017, they had a highly memorable moment at WrestleMania 33, but it felt a bit confusing at the time. The Hardys were coming off the run as the “Broken” Hardys, to the point Matt was still “deleting” as the duo hit the ring, even though they were using the classic Hardy Boyz theme. This time, it looks like it will be classic Hardy Boyz ready for all the high-profile matches that AEW has to offer.

Check out video of Jeff Hardy’s debut from last night’s Dynamite on TBS: